Kurdish fighters and a group monitoring the Syrian conflict have accused "Islamic State" (IS) of using poison gas in northern Syria late last month. The type of chemical allegedly used has yet to be identified. 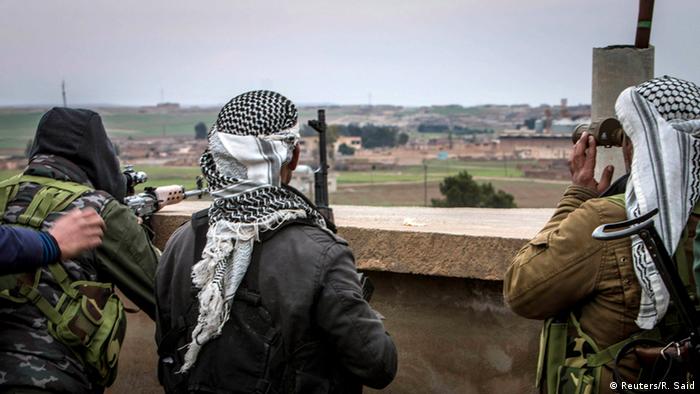 The Syrian Kurdish YPG militia group said on Friday that IS had fired "makeshift chemical projectiles" in attacks in and around the city of Hasaka.

The gas was allegedly used against YOG-held parts of the city on June 28, as well as against militia positions to northeast of Hasaka, near the town of Tel Brak.

YPG spokesman Redur Xelil said the type of chemical had yet to be properly determined. He said none of the fighters exposed to the gas had died because they were taken to hospital.

Xelil said it was the first time IS had used a poison gas against the YPG. He said the type of chemical used had not been accurately determined.

The Britain-based Syrian Observatory for Human Rights said it had also documented the Tel Brak gas attack on June 28. The Observatory added that it received information about the gas being fired into Hasaka city, but gave no further details.

"We have documented after looking into statements and tests made by doctors that some kind of gas - we do not know if it was chlorine gas - was used," read an Observatory statement.

The YPG said its soldiers had "experienced burning of the throat, eyes and nose, combined with severe headaches, muscle pain and impaired concentration and mobility."

"Prolonged exposure to the chemicals also caused vomiting," it added.

The YPG, which has driven IS out of large parts of northeastern Syria with the help of US air strikes, said its forces had captured industrial grade gas masks from IS fighters in the last four weeks. The development was seen as "confirming that they (IS) are prepared and equipped for chemical warfare along this sector of the front."

Other rebel fighters accused IS of using weapons against them earlier this year, said it was investigating the alleged use of chemical weapons with the help of an international team of experts.

The Syrian government itself has repeatedly been accused of launching chlorine gas attacks on its own citizens in rebel-held towns, violating a UN Security Council resolution.

International experts are said to have found traces of precursors for VX and sarin nerve gas at an undeclared location in Syria, although Damascus has denied using chemical weapons on the battlefield.

The OPCW has declared that nearly all global stockpiles have been destroyed. But the organization's director-general says "more" needs to be done before the world is free from chemical weapons. (28.05.2015)