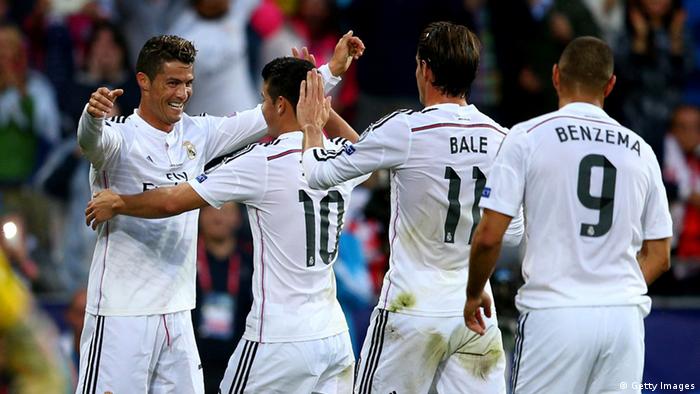 In his first game for Real Madrid, Toni Kroos won a trophy. In the European Super Cup, Kroos helped drive Madrid towards a win against Sevilla in Cardiff, Wales. Both the goals came from Cristiano Ronaldo, one on the half hour mark and one shortly after half time. Kroos' international teammate and recent World Cup winner Sami Khedira wasn't even on the bench for Real Madrid as the rumours around his departure continue to grow.

Alongside Kroos, who ended up retaining a trophy he won last year, was Madrid's other summer expense - James Rodriguez. The Colombian failed to hit the same heights as he did at the World Cup in Brazil earlier on in the year, but Kroos appeared to slip straight into the team's midfield. He covered the most distance of all Madrid players - just under 12km - and was constantly involved in possession retention. The quality of his set-pieces also didn't disappoint and, after only five training sessions, the midfielder looks more than up to speed with his new club's system. He did pick up a yellow in the second half for a late tackle though.

In front of 33,000 fans, Real Madrid came out on top right from the start. Ronaldo and Gareth Bale both missed good opportunities to put Madrid ahead, but couldn't beat Portuguese goalkeeper Beto - the man who helped Sevilla claim victory in the Europa League final with his penalty shoot-out heroics.

While Beto did his best to keep Ronaldo and co. at bay, it wasn't long before a speculative cross by Bale was turned home by Ronaldo. Four minutes after the break, Madrid's pressure continued and Ronaldo decided the game with a powerful strike after smart work from Kroos and Karim Benzema. The goal was Ronaldo's 23 in 21 competitive fixtures in 2014 for Real Madrid - and his 18th against Sevilla.