In Sunday's early match, Wolfsburg made easy work of struggling Hamburg. In the late one, Dortmund were characteristically wasteful, but got help from foes Gladbach and got a much needed 1-0 win. 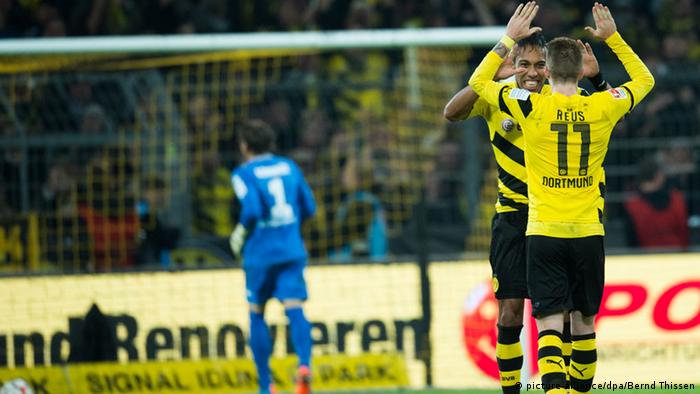 Borussia Dortmund picked up their first league win in 57 days and move out of the relegation zone with a 1-0 win over Borussia Mönchengladbach.

The home side were on a five-game losing streak, which had taken them all the way to the bottom of the Bundesliga. Mönchengladbach, however, were on a roll, having risen up to third in the table and broken a club record of going 18 games without defeat.

The problem for Jürgen Klopp's men has not been creating, but converting their chances. And that shortcoming was on ample display in the first half, as the men in yellow and black peppered the Gladbach goal with shots, only to narrowly miss their mark or be denied by superlative Foals keeper Yaan Sommer.

Forward Pierre-Emerick Aubameyang did put the ball in the net with a spectacular overhead kick, but he was offside. The first half ended goalless and Klopp will have been pulling his hair out by the roots, while Gladbach coach Lucien Favre must have thanked his lucky stars.

Dortmund would finish the match with 22 shots on goal to Gladbach's lone one, but they needed assistance from their opponents. Just before the hour mark, Gladbach midfielder Christoph Kramer misjudged a back pass from about 40 yards and lobbed Sommer, bizarrely, for the only goal of the match.

"An own goal can happen," a sanguine Kramer said after the match. "What makes me mad is that we played crap."

"Kramer is an exceptional player," the Dortmund coach told reporters. "What can I say? Kramer now has a small, unintentional place in our history."

In the end, Dortmund completely deserved their victory, dominating their opponents from start to finish. Klopp's men move up to 15th, while Gladbach lose ground on Wolfsburg and Bayern at the top. 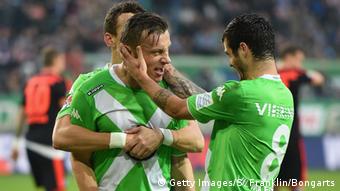 Olic got a cuddle after scoring for the Wolves

In Sunday's early match, Wolfsburg were looking to defend second place with a win against Hamburg and came out pressing with intent. The Northern Germans' porous defense has improved in recent weeks, though, so the Wolves initially had trouble finding a way through.

It took a free kick after 28 minutes to break the ice. Kevin de Bruyne volleyed a hard, low shot toward goal, and veteran forward Ivica Olic diverted it into the net. Wolfsburg could have added to their lead, but the half ended 1-0.

After the restart, Hamburg were more ambitious offensively, with Pierre-Michel Lasogga steering a couple of headers in the right direction. But the visitors were caught out by an absolutely textbook counterattack four minutes after the hour mark.

De Bruyne sprinted the length of the pitch and put in a perfect pass for Aaron Hunt. Hunt took his sweet time and left Hamburg keeper Jaroslav Drobny no chance at all. It was the Belgian's ninth assist of the season - by far and away a league best.

The 2-0 win means that the Wolves keep pace with Bayern at the top of the table. Meanwhile, Hamburg remain in the relegation zone.

Borussia Dortmund are enjoying their first win in the Bundesliga in six games. It was a deserved victory, which came via a terrible error from Christoph Kramer. One thing is for sure though, BVB are improving. (10.11.2014)

Saturday's round 11 action was full of surprises. Tiny Freiburg took down Schalke, and Cologne suddenly discovered their scoring boots. About the only match that went to plan was Bayern's 4-0 win over Frankfurt. (08.11.2014)

Train strikes have affected everyone in Germany, even the country's top football clubs. Still, Bundesliga Matchday 11 should go ahead uninterrupted. Of all nine matches, Dortmund vs. Gladbach is the stand-out game. (07.11.2014)