Elderly South Korean women forced to work in Japan's wartime brothels held their 1000th weekly protest in Seoul on Wednesday. They are still waiting for some kind of compensation and an official apology. 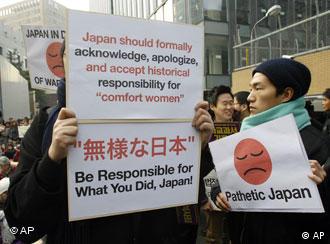 Despite protests from Tokyo, on Wednesday, protesters in the Korean capital placed a statue representing the victims of Japan's World War Two-era sex slave trade outside the Japanese embassy.

A few hundred protesters, including a handful of the former sex slaves - there are not that many left - surrounded the life-size statue of a girl sitting on a chair in traditional Korean clothes, which was unveiled to mark the 1,000th weekly rally for women forced to work in brothels for Japanese soldiers.

Five women in their 80s and 90s, who are among the last surviving so-called "comfort women," shouted "apologize" and waved banners reading "compensate" and "admit the war crime."

The five former sex slaves hugged the statue as Japan demanded its removal.

"Young girls were dragged to other countries as slaves of the Japanese military," said a frail 85-year-old victim, Kim Bok-Dong. "I demand that the ambassador of Japan tell the Japanese government to apologize before we all die." 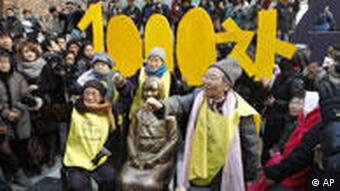 The oldest of the former Korean "comfort women" died at the age of 94 earlier this month and another, who was 87, died Tuesday. Sixty-three others are still alive, out of an estimated wartime total of some 200,000.

"The Wednesday demonstration, which has lasted for 20 years, is an unbearable blaze of anger against sexual slavery crimes committed by Japan that have trampled on national pride," the group that organizes the rallies said in a faxed statement.

In an unusual move, a North Korean association for comfort women sent a letter of support.

The issue first came into public view in the early 1990s after some victims found the courage to come forward.

Japan has apologized for the military's crimes against the women, but denies official responsibility for running the brothels. Tokyo, which ruled Korea from 1910 to 1945, says all claims for colonial-era suffering were settled in a 1965 compensation agreement with Seoul. Japan has refused bilateral talks on the issue.

Wednesday's embarrassing episode in front of the embassy comes ahead of President Lee Myung-bak's official visit to Japan for talks over the weekend.

It seems that Nazi Germany’s erstwhile ally, Japan, is finding it hard to come to terms with its past. In recent years, the country has been repeatedly criticised its commemoration of "heroes" and war crimes. Pressure on Japanese soldiers to commit suicide when the war was nearing its end has triggered a recent debate. (25.12.2007)