The former Korean Air executive whose "nut rage" meltdown earned her international notoriety and a one-year jail term has walked free after nearly five months in prison as an appeals court suspended her sentence. 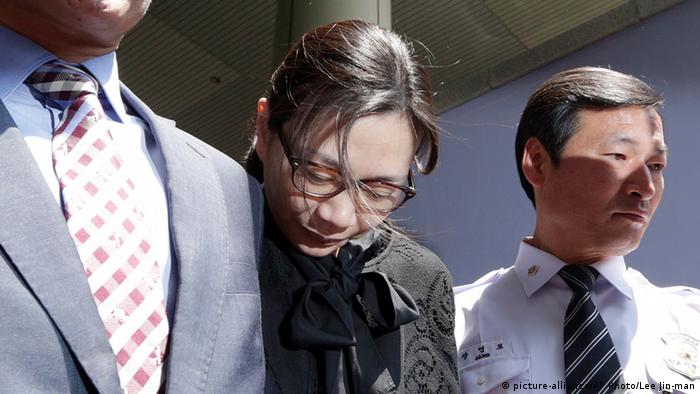 Cho Hyun-ah, the daughter of the airline's chairman and a former vice president, had been charged with forcing an aircraft to alter its flight route, a regulation that is typically reserved for punishing hijackers, after she vociferously chastised a flight attendant for serving her macadamia nuts in a bag rather than on a plate.

But on Friday, a High Court in Seoul overturned that ruling, which had been passed down by a lower court in February. Judges said Cho's actions did not amount to changing an aircraft's flight path as the plane had still been taxiing on the runway at the time of her outburst.

The court deemed Cho posed only a "modest" threat to the safety and security of the aircraft, but they did uphold other charges against her, including convictions for hampering the flight's captain in his duties and violence against the cabin crew.

During the original trial, the chief steward testified that Cho had forced him to kneel and beg for forgiveness for the behavior of his crew members, poking him with a service manual all the while.

That steward has now filed a civil lawsuit against the now infamous executive, who immediately changed out of her prison garb after the upper court announced its ruling and was escorted out of the courtroom to a waiting sedan.

The high judges said they opted for leniency not only because Cho, a mother of 2-year-old twins, had no prior offenses, but because she had already suffered a good deal of public shaming for the incident, which many in South Korea viewed as characteristic of the spoiled, elitist children who grew up sheltered by powerful, family-run conglomerates that often act with impunity.

"It appears that she will have to live under heavy criticism from society and stigma," said Kim Sang-hwan, head of the high court's three judge panel.

The ruling was received less warmly among ordinary Koreans, many of whom expressed annoyance at what they perceived as privilege trumping misbehavior.

One 19-year-old college student named Kim Ryeong-hui told the Associated Press that if Cho was released for showing repentance, other incarcerated criminals should be freed as well.

"I think the court went easy on her," Kim said. "I feel angry when people mistreat other people in lower ranks."