Forget scarves, baby booties and cabled sweaters. For artist Annette Streyl, knitting is about expression and architecture rather than clothes. 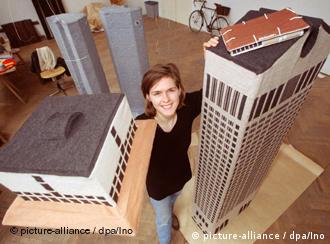 Annette Streyl knits buildings. Not just any buildings, but famous ones, meaningful ones -- buildings whose absence would leave the German skyline bereft.

She has knitted Berlin's TV tower and the Reichstag. She knits to the original plans of her subjects, and in doing so, creates a unique interpretation of the centers of power in Germany.

"What makes (my art) special is the fact that people assume wool is a simple material. But only when you create something round. As soon as you make wool angular, which most architecture is, it gets amazing complicated," Streyl told DW-TV.

"That's when wool develops a sense of humor, if you will. It does everything you don't expect it to. It gets stretched, it's soft and out of shape. It helps create an impression that it has absolutely nothing in common with a house."

Streyl has knitted versions of the Deutsche Bank headquarters in Frankfurt and the old communist Palace of the Republic in Berlin's east. She aims to replicate different building materials in her knitting, be it steel, glass or concrete.

A life of its own

One of Streyl's first creations was the Kunsthalle art gallery in her home town of Hamburg, and it is also where her first knitted works were exhibited. Today, three of her works of art hang there. 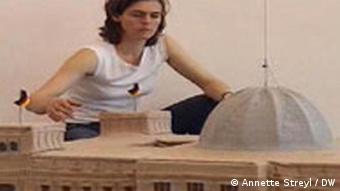 The Reichstag in wool

"The joke happens of its own accord. The wool just does what it wants, so you see this proud eagle sitting on a globe suddenly hanging down like a dead chicken. I believe you can read a very nice meaning into that," she said.

With her customary attention to research and passion for detail, Streyl has been working on the model of the mammoth Nazi hall for the past three years. The building was never constructed. All she had were plans, models and drawings. The hall was to have measured 320 by 250 meters (350 by 275 yards). Now it's in centimeters. 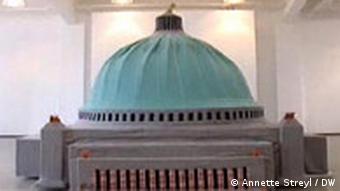 As for her reasons for choosing the Great Hall as a subject, she said, "I wanted to work with an imposing building, one that had a face. And this great hall has a massive green dome, which is unique. Luckily the building was never made, but the plans were all there. It stayed on the drawing board, but you could quite easily have seen it in Berlin."

Streyl studied sculpture, and now has a studio in the Winterhude district of Hamburg. While assistants help her complete her knitted works -- she gives them exact instructions and measurements to follow -- Streyl also works in stone. But stone carving is a medium Streyl works in alone.

Currently, she is working on a series of ornamental heads inspired by decorative facades from medieval times.

"I like to do both (wool and stone)," Streyl said. "I find the knitting project extremely interesting because of the subject matter. And it's always exciting to see how the finished product shapes out. I worked hard on planning these, and it's great to see the final result."

As Berlin continues to wrangle with monuments of its inglorious past, one last big post-unification project is almost finished: Europe's largest train station. (March 6, 2006)

A virtual tour of Hitler's "New Chancellery" is causing an uproar, with critics saying it was created for neo-Nazis. (March 17, 2006)