Bayern Munich's hangover on Sunday didn't come from a long night at the Oktoberfest, but from a painful 5-2 Bundesliga loss against Werder Bremen. Coach Juergen Klinsmann however, refused to drown his post-match sorrows. 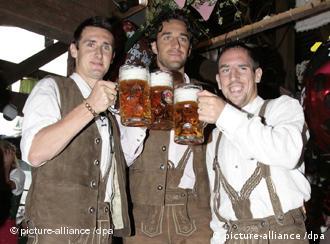 "I don't envy you, have a few beers at the Wiesn (the beerfest) tonight," Beckenbauer said after the game.

But Klinsmann would have none of it: "I take any advice from Franz, but this one I won't."

Klinsmann needed a clear head, after all, to analyse the first season defeat of the champions which in the Sunday papers was drew headlines such as "Klinsi-disaster" and "Klinsi-catastrophe." 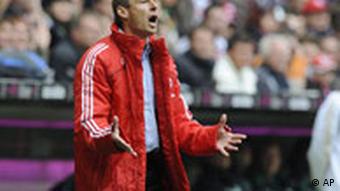 Klinsmann was infuriated but refused to turn to drink

Goalkeeper Michael Rensing, the new number one between the posts after Oliver Kahn's retirement, did not look good on several occasions.

The defensive line around Martin Demichelis and Lucio was outplayed by a Bremen team led by two-time scorer Markus Rosenberg and teenager Masut Ozil, who scored one and set up two others.

Once Bremen raced off to a 5-0 lead midway through the second half there were haunting memories of Munich's worst ever home defeat, a 7-0 loss against Schalke in October 1976.

Munich rebounded with a 6-2 triumph over SV Hamburg in their next home match but eventually finished a dismal seventh in that season. 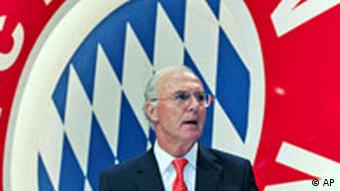 Beckenbauer was sympathetic to Klinsi's plight

That is something Klinsmann can not afford in his debut season at the champions, after being chosen as coach in a surprise move by Munich's leadership of Beckenbauer, Uli Hoeness and Karl-Heinz Rummenigge (who all played in that 1976 match).

Klinsmann, 44, has completely overhauled Munich's training regime and personnel. He is condemned to win titles and is convinced that Saturday's performance will not be repeated.

"We suffered a big blow. You have to admit that the opponent was better and tought us a lesson. Now we have to learn from that."

"We have hit the ground. But we will get up again and become even stronger," vowed Klinsmann.

"Bremen were the better team, most of all because they were ruthless with their chances. They hit us with the next blow every time we were finding our way back.

"Unfortunately, we came up short of what was needed to win the game, but the team will be very self-critical when dealing with this defeat and then we'll look to the future," Klinsmann added. "I believe you learn a great deal from days like today." 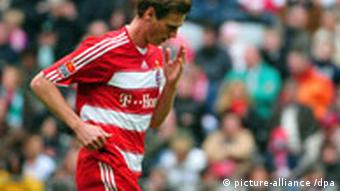 Goal-scorer Borowski admitted he had difficulty coming to terms with the result and apologised to fans. "I can hardly believe we've conceded five goals," said the German midfielder.

"We were absolutely terrible, no doubt about it, and we owe every fan in the stadium an apology.

"I sensed we were a little lethargic," he added with innocent understatement. "We were never close enough to them, we never put Bremen under any kind of pressure, and you can't do that against a team as strong as Bremen.

"There's bound to be criticism after a performance like that, and we'll have to take it on the chin."

Munich chance to redeem themselves comes in a midweek cup match against Bavarian rivals Nuremberg, with the next Bundesliga task on the weekend at Hanover 96.

Bayern Munich were humiliated 5-2 on Saturday by Werder Bremen as the Bundesliga champions suffered one of their worst home defeats and their first competitive loss under new coach Klinsmann. (20.09.2008)

Spotlight on Klinsmann as Bayern Start Season as Favorites

Bayern Munich expect new coach Juergen Klinsmann to deliver the club's 22nd German league title when the Bundesliga season begins for the 2007-08 league and cup winners at home against Hamburg on Friday. (15.08.2008)

Juergen Klinsmann on Monday started his new job as Bayern Munich coach with only a dozen available players but full of confidence that he can create another soccer revolution. (30.06.2008)