The funeral for Thai King Bhumibol Adulyadej marks the end of an era. A period of instability looms large over Thailand, with military generals running the country with an iron fist and political parties in disarray. 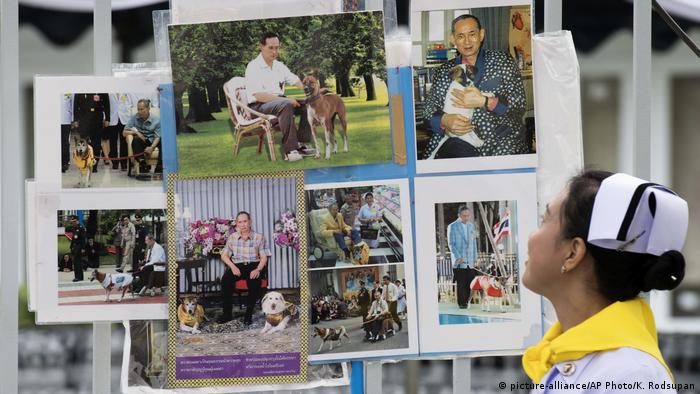 Thousands of people have gathered around the Grand Palace in Bangkok to pay tribute to King Bhumibol Adulyadej. The late king's five-day funeral will start Thursday.

Bhumibol, who reigned for 70 years and died last year in October at the age of 88, was more than just a king for most Thais. He was a role model for citizens. In times of political upheaval in the country, Bhumibol often played his role as a mediator between feuding political groups.

Thailand is currently undergoing a political crisis, with former PM Thaksin Shinawatra's family practically out of politics and the military ruling the country with an iron fist. In the present situation, King Bhumibol's absence is severely felt by the Thai people.

A teacher, a role model

Kluey Sooksom made a long journey to Bangkok to pay her respect to the late king.

"Bhumibol was very much a down-to-earth king. I'm really sad that he's no longer with us," Kluey told DW.

King Bhumibol was known for advising the Thai people on their day-to-day issues, for example how to be a good Buddhist, or how to lead an austere life.

"I followed his philosophy that it is important to stand on one's own feet. The king taught us that we shouldn't take loans when we don't really need them. I have always followed his teachings and it has done me well," Kluey said.

"His life teaches me that we must pass on our knowledge to others," Tyomgyot told DW.

A group of some 300 volunteers are making sure everything goes smoothly at the funeral.

"We want to do this for the king," Butsaba Tuntipiboon, a volunteer, told DW. "It's our way to pay him [Bhumibol] respect."

A period of uncertainty

A final farewell to King Bhumibol could well mean that the political conflict that has bitterly divided the Thai nation for many years would resurface.

"Thailand is at a critical juncture," Paul Chambers, a lecturer of politics at Naresuan University, told DW.

"A long period of perceived stability under a father figure is now transiting to an era in which many Thais are unsure about their future," Chambers said.

The uncertainty is partly triggered by Bhumibol's only son and successor Maha Vajiralongkorn's detachment with Thailand. The 64-year old spends most of his time in Germany and is not very popular among the Thai people. It's unclear how Vajiralongkorn will be as new king once the mourning period for Bhumibol is over.

"There is a perception that Bhumibol's successor can't emulate his father," Chambers said. "Vajiralongkorn understands that he's not popular and that he cannot take chances. That is why he has taken direct control of some royal agencies and is trying to be acceptable to all sections of the military."