Kenyan security forces have been locked in a final battle with Islamist gunmen inside a Nairobi mall which has been under siege since Saturday. At least 62 people, including Kenyans and foreigners, have been killed. 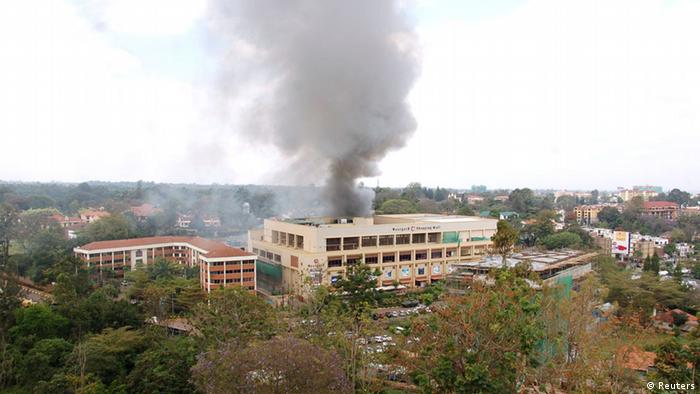 Kenyan officials said 10 people have been detained in relation to the attack and that several of the gunmen had been killed.

"We can confirm that 3 terrorists have been killed so far, a few others have suffered injuries," the interior ministry said on its Twitter feed.

As of early evening, the police and army said they were in control of all of the building's four floors.

Interior Minister Joseph Ole Lenku said the evacuation of hostages "has gone very, very well" and that Kenyan officials are "very certain" that there are few if any hostages left in the building.

Earlier in the day several large explosions and gunfire had also be heard around the Westgate shopping center. Part of the building had also caught of fire causing thick smoke to fill the sky.

The Israeli-built mall, which was popular with wealthy Kenyans and expatriates, was attacked by Islamist insurgents midday on Saturday. Upon entering the shopping center, the militants reportedly targeted non-Muslims. Somalia's al-Qaeda-linked al-Shebab group has claimed the attack, saying it was in retaliation for Kenya's military intervention in Somalia, where African Union troops are battling the Islamist insurgency.

Kenyan army chief Julius Karangi said the gunmen had different nationalities. "They are from different countries. We have sufficient intelligence this is global terrorism," he said.

The Kenyan Red Cross has revised the death toll to 62, seven lower than previously reported, due to "double-counted bodies." Interior Minister Lenku also confirmed this death toll adding that some 200 more people had been injured.

Both Kenyans and foreigners were confirmed dead in the attack, with British, French, Indian, Canadian, Dutch, Ghanaian and Chinese citizens reported among those killed. Officials said the death toll could rise after security forces have completely searched the complex.

In a televised speech to the nation on Sunday, Kenyan President Uhuru Kenyatta vowed the attackers will "not get away with their despicable and beastly acts."

"We will punish the masterminds swiftly, and indeed very painfully,” he said also revealing that a family member, a nephew and his nephew's fiancee, were among the dead.

On Monday, the International Criminal Court suspended the atrocities trial of Kenya's vice president, William Ruto, for one week while the country deals with the hostage situation.

World powers have condemned the deadly attack, the deadliest attack in Kenya since 200 people were killed in the 1998 bombing of the US embassy in Nairobi by al Qaeda's East Africa cell.