Three men have been convicted for supporting the 2015 Garissa University terrorist attack in Kenya. Though they were not among the gunmen, the trio knew the al-Shabaab assault would happen. 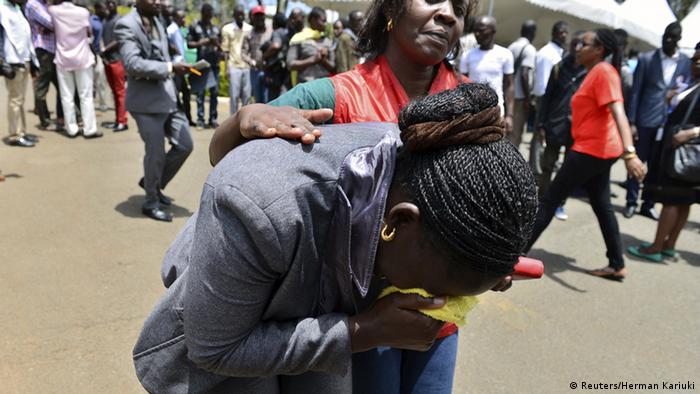 Three members of the militant Somali group al-Shabaab were found guilty by a Nairobi court on Wednesday of conspiracy to commit a terror attack in the 2015 assault at Garissa University in northeast Kenya that killed 148 people.

Kenyans Mohamed Ali Abikar, Hassan Edin Hassan and Rashid Charles Mberesero, a Tanzanian, "were members of the al-Shabaab terrorist group whose members carried out the attack," Judge Francis Andayi said. The men knew the attack would happen and did not inform authorities, the judge added.

A fourth defendant was acquitted. A fifth accused was acquitted earlier this year. The guilty will be sentenced in July.

Four gunmen from the al-Qaeda-affiliated Islamist group rampaged through Garissa University on April 2, 2015, before being killed by security forces the same day.

The militants separated the victims according to religion, letting Muslims free while killing Christians. Most of those killed were students.

The operation's suspected planner, Mohamed Mohamud, also named "Kuno," was killed in a joint US-Somali military operation in southwestern Somalia in 2016.  Al-Shabaab said he as killed by "US Crusaders."

Al-Shabaab is fighting to overthrow the government of Somalia, but regularly carries out attacks in Kenya, which has troops in its neighbor as part of an African Union force.

The Garissa University attack was the second-deadliest terror attack in Kenya after the bombing of the US Embassy in Nairobi in 1998. The al-Qaeda attack killed 213 people.

Leaving behind a life of terrorism in Kenya

In 2013, al-Shabaab militants killed 67 people at the Westgate shopping mall in Nairobi. In January 2016, al-Shabaab attacked a Kenyan army outpost in southern Somalia, killing as many as 180 soldiers.

Earlier this year, another al-Shabaab attack on a Nairobi hotel killed more than 20 people.

US special forces are supporting Somali government forces and African Union troops fight al-Shabaab, with regular drone and airstrikes on the militants.

Kenya's security agencies are under scrutiny following the latest attack on a hotel compound. Analysts say it's a sign that al-Shabab is still very much a force to be reckoned with. (16.01.2019)