For centuries, Lake Wular has been a major source of food and income for thousands of Kashmiris. But widespread pollution, mining, and dam construction are putting the region's fishing community at risk. 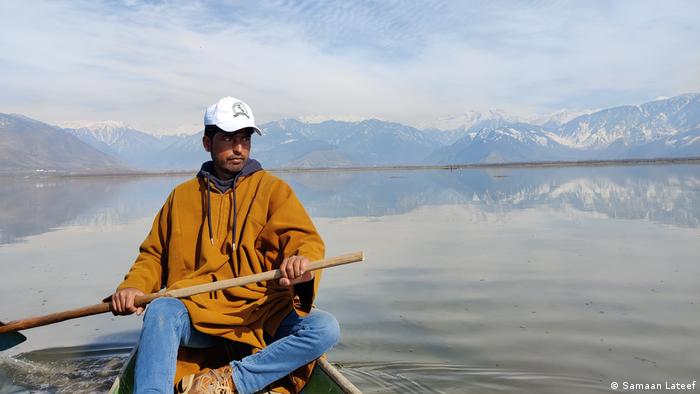 Lake Wular fishermen like Daseer Dar (pictured) say they spend days in search of catch, only to return home empty-handed

Every morning before sunrise, 36-year-old fisherman Naseer Dar takes his boat out to Lake Wular, one of the largest freshwater lakes in Indian-administered Kashmir.

Nestled amid the Himalayas, the lake spreads over 130-square-kilometers between the Baramulla and Bandipora districts in north Kashmir.

Thousands of Kashmiris depend on the lake's fish and chestnuts. But with increasing siltation, Lake Wular is suffering from a massive decline in fish production. Widespread pollution has stunted the fishing community, exacerbating poverty in the region.

Rowing through tin and plastic containers for hours, only to catch zero fish, has become the norm for Dar and many other fishermen who rely on fish as their only source of income.

"It's as if this lake is cursed now — the fish have almost vanished. I have to return empty-handed on the third consecutive day," Dar told DW.

Zoona Begum, 62, of Leharwalpora village in Bandipora district, is worried about her community's survival.

"Earlier, a fisherman could catch up to 15 kilograms of fish in a single day, but now two kilograms a day is a big deal," she told DW.

Two out of Wular's 21 fish species are caught for commercial purposes, but water pollution, mining, the construction of dams, and fishing during the breeding season have driven many fish species to the brink of extinction.

"Some exotic species like the Common Carp have adopted well in Kashmir, but at the cost of indigenous Schizothorax. Also, the local species find it difficult to cope with the problem of eutrophication in the water bodies," Hashmat Habib, a researcher who has been working on sustaining the livelihoods of Wular's fishermen, told DW.

According to a survey by Wetland International South Asia, a global environmental consultancy, Wular has seen a steep decline in catch over the past 50 years.

The total catch as extrapolated from the catch records from the surveyed villages has declined from 10,544 to 1,476 metric tons per annum, the survey noted.

Habib says the government needs to implement a blanket ban on fishing during the breeding season of January to April to allow the fish to increase in number and size.

He added that the government needs to come up with a comprehensive plan to boost fish production to lift fishermen out of poverty.

Director of Fisheries Bashir Ahmad Bhat, however, says the government can't ban fishing during breeding season because the impacts would be too severe on the livelihoods of fishermen.

How are conservationists trying to save Wular?

According to Bhat, fish are on the decline due to their shrinking natural habitat caused by dam construction and the extraction of minerals.

"Many species of our local fish would migrate to upper streams for natural breeding but dams and mining are preventing that, resulting in a decline in fish production," he told DW.

Mudasir Mehmood Malik, the coordinator of Wular Conservation and Management Authority (WCMA), says an area of 130-square-kilometers at the lake has been reserved in an attempt to preserve natural habitat and boost fish production.

An area of 4.35-square-kilometers has also been restored to increase water expansion, and at least 100,000 willow trees have been removed to decrease siltation, Malik told DW.

Fisherwoman Haleema says the majority of fishers living around Lake Wular are $1,000 (€890) in debt on average. She says fishers are compelled to sell their produce to middlemen at lower prices than the market value.

"The traders fix the rate of around one dollar per kilo and sell it outside our villages at six dollars per kilo. We are being exploited for generations," Haleema told DW.

The 30-year-old is living in a two-room mud-house at Leharwalpora village along the banks of Lake Wular. In December, she developed a gynecological complication, forcing her husband to take a loan of $2,300 from a trader.

"I have not earned $700 dollars from my fish catch in one year, how will we pay back the loan, medical bills and education for our children?" asked her husband, Muhammad Shafi.

Kashmir: Remote villagers unite to clean up their stream

The decline in fish catch and rising debts have forced some fishers to shift to other activities for their livelihood, at times proving fatal.

On January 28, two brothers from the fishermen community lost their lives in Leharwalpora while extracting sand from the Jhelum river.

Hilal Malla, 22, and his elder brother Naseer Malla, 35, had been unable to pay a debt of around $2,000 to a fish trader, so they went to work at a sand mining site.

"They had no experience of sand extraction. They were crushed under the sand-filled boat…" their relative, Bashir Hundoo, told DW. Their bodies were retrieved after two days.

The brothers left behind two widows and three children, who lost their only breadwinners.

"Who will look after my child? Our life has become a battle between bad and worse," said Saima, Hilal Malla's widow.

Dubai's accord with the Indian government to build infrastructure in Jammu and Kashmir comes at a time when the volatile Himalayan region is witnessing a resurgence in violence.