The western German city of Trier has unveiled a statue of Communist philosopher Karl Marx to commemorate 200 years since his birth. More than 300 events were organized to mark the occasion, which also drew protesters. 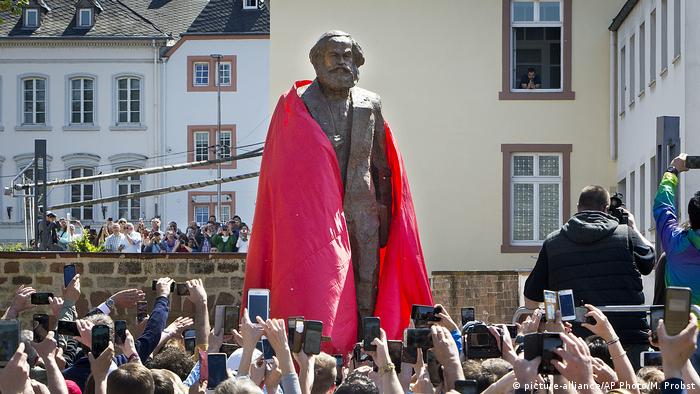 A 4.4-meter (14-foot) bronze statue of Karl Marx was unwrapped in front of a crowd of several hundred people in Trier's city center at the weekend.

The ceremony, one of around 300 planned events, was occasionally interrupted by chants and boos from different groups of protesters nearby. For months, the sculpture — a gift from China — has been a source of controversy in the western German town where Marx spent the first 17 years of his life.

"The present from China is a pillar and a bridge for our partnership," Malu Dreyer, state premier of Rhineland-Palatinate, where Trier is located, told the crowd.

Read more: Karl Marx at 200 — What remains of his legacy?

Marx, one of the fathers of socialist thought, authored the "Communist Manifesto" in 1848 and later "Das Kapital" (Capital), both of which had a significant impact on the politics and conflicts of the 20th century.

State authorities set up an exhibition entitled "Karl Marx (1818-83), Life - Work - Influence up to the Present," where more than 400 items from almost a dozen German states will be on show in two Trier museums.

There are also two displays in the city's Cathedral Museum and in the Karl Marx House, where he was born.

A German group representing victims of Communism criticized the Marx anniversary celebrations saying they lacked a debate about the philosopher's support of violence in eradicating social classes.

"We say yes to a debate about Marx, but no to his worship," the group's leader, Dieter Dombrowski, said in a statement.

Andrea Nahles, the newly elected head of the Social Democrats, rejected criticisms that the festivities were excessive: "If we're going to celebrate, then this is the time. And, in light of Marx's worldwide importance, completely reasonable."

"We can finally look at Marx a bit more impartially," she said, at an event at the Karl Marx museum. "That was always superimposed during the Cold War by so-called real existing socialism."