At first they arrested her Chinese assistant, Zhang Miao. Then the authorities put the screws on her. In the end, Angela Köckritz, correspondent for German weekly Die Zeit, decided to leave China in haste. 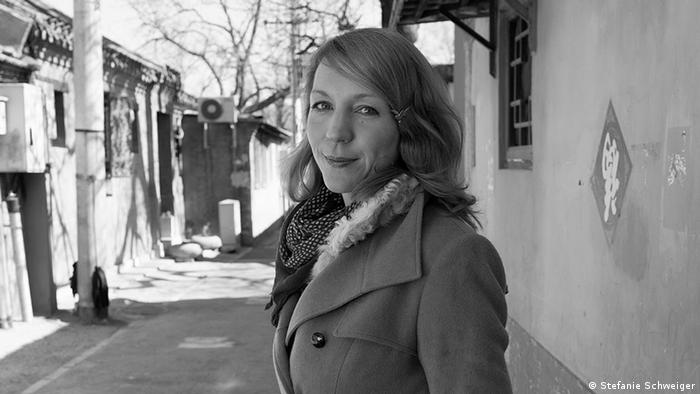 DW: Your assistant Zhang Miao was arrested more than three months ago. But you went public with that story only a few days ago. Why?

Angela Köckritz: We did exactly what the Chinese have always been demanding. We gave them time so that things could be negotiated behind the scenes. But that didn't lead to anything. That's why we decided to go public.

Miao was arrested after she returned from Hong Kong where she, together with you, reported about the pro-democracy protests. What are the authorities accusing her of?

She was charged with inciting a public disturbance. At first they told me that she was involved in a village squabble. She allegedly reviled and hustled police officers. But right from the beginning, this hasn't sounded very convincing. We still don't know for certain what exactly they are accusing her of. We have so far not seen any proofs. The problem with the accusation of causing "public disturbance" is that it's used against those who have a different political view. It is construed extensively.

How is Miao doing? When was the last time you have had contact with her?

Her lawyer last saw her on December 25. Our latest information is that she is doing alright, given the circumstances. However, Miao seems to be suffering in prison, both physically and mentally. Unfortunately I can't say for certain what exactly that means. We have no reliable information on what will happen next.

You, too, were questioned several times by the Chinese Ministry of State Security. What exactly happened?

I was questioned four times. Then I left the country. Otherwise there would have been more, I presume. The questioning always lasted several hours; four and a half the longest. Every time there were new investigators, and I therefore had to deal with new people each time I was there.

The first ones weren't very experienced, but the ones I met later were extremely experienced investigators. They used a lot of tricks and tried to unsettle me psychologically so that I would become nervous or scared and make mistakes. During the course of the questioning, they threatened not to issue my journalist visa for next year. Furthermore, I was threatened with unspecified negative consequences. They later accused me of spying and organizing pro-democracy protests in Hong Kong.

In 1989, China's reformist premier Zhao was removed from power and put under house arrest after the Tiananmen protests. He died from a stroke in 2005, but his name remains a taboo in China, says Eberhard Sandschneider. (14.01.2015)

Are there any incidents you specifically remember?

There are two things that I can't get out of my mind. During the third interrogation, there was one investigator who loved horse riding methapors. He explained to me that the most important thing with jockeys and horses would be that the jockey earns the trust of his horse in no time. Then he asked me whether I trusted him. I said: Don't take this personal but the answer is "no".

Then he told me that my assistant had said that I had organized the pro-democracy protests in Hong Kong. I said that I wouldn't believe that and that for me there were only three options: she was forced to give this statement, or she was lying, or that she had never said anything like that at all. Then the investigator said that there was a fourth option. And all of a sudden he had a go at me and yelled: "you're lying, you're lying, you're lying."

A second moment that left a fierce impact on me was when a member of the German Embassy told me to hire a lawyer because if I were to be arrested, the Embassy could do nothing but protest. That's when I thought it might be better for me to leave the country.

It is well-known that the Ministry of State Security invites foreign correspondents for talks. But there seems to be a whole new dimension to the way that you were put under pressure. Is that new?

It was all very new to me. That was why I asked around among more experienced colleagues, among them the foreign correspondents club in Bejing. There were occasions when journalists were invited - for example after the outburst of the Arab Spring - and were told that their visas wouldn't be renewed. Most of the foreign correspondents faced troubles with local law enforcement authorities when researching a story. But an incident with such a dimension has so far not happened. Nobody could remember anything like that.

Your assistant is still in detention. How do you deal with it personally?

In the beginning, I tried to lock out all emotions. There was only one thought: Getting her out of there. This thought ruled my brain and my emotional life. So writing the article about the incident was very painful because all the emotions welled up. It was probably the text that was hardest to write for me - especially because I am such close friends with Miao.

Could you imagine working in China again?

Yes, of course. I am like Deng Xiaoping. I'll be back.