A new report from Israel shows a near one-third rise in anti-Semitic violence and vandalism worldwide in 2012. Researchers have pointed the finger at copycat attacks in France and popularity of extreme-right groups. 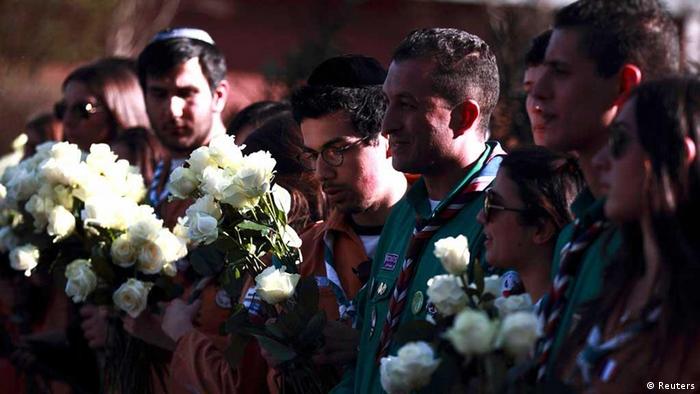 According to the research, released on Sunday to coincide with Israel's Holocaust Remembrance Day, there were 686 recorded attacks or acts of violence against Jewish individuals, sites or property last year, up from 526 the year before. The 30 percent climb follows a decline over the past two years.

A majority of the attacks, 200, happened in France - which researchers said was a result of "copycat" attacks following the Toulouse school shooting in March 2012, in which a Muslim extremist gunman killed three children and a rabbi. It said physical assaults on Jews in France have almost doubled.

The report was conducted by the Center for the Study of Contemporary European Jewry at Tel Aviv University in cooperation with the European Jewish Congress, an umbrella group of Jewish communities in Europe.

The researchers said they were able to demonstrate a direct correlation between the anti-Semitic incidents, as well as those on other minorities, with a rise in the popularity of extreme-right wing parties in some European countries.

This association, the researchers said, could be linked to the ongoing eurozone crisis - which has seen growing support for parties like Jobbik in Hungary, Golden Dawn in Greece and Svoboda in Ukraine.

There was also a spark in incidents following Israel's military attack on Gaza last November, according to the findings.

Growing 'lack of political will' in Nazi search

Also on Sunday, the Simon Wiesenthal Center released its annual report on global efforts to hunt down alleged Nazi war criminals, praising the United States and Germany, but heaping criticism on Australia after its high court rejected the extradition of a man accused of a Holocaust crime. It publishes the report to encourage governments to hold Holocaust perpetrators accountable.

The organization, based in Los Angeles, gave the United States an 'A' grade for its efforts, while Canada, Germany, Hungary, Italy and Serbia each got a 'B'. On the bottom of the list with an 'F' were Australia, Austria, Estonia, Latvia, Lithuania, Ukraine, Norway, Sweden and Syria.

"The most disappointing result in a specific case during the period under review was the decision by the Australian High Court to reject the extradition request submitted by the Hungarian authorities for Karoly (Charles) Zentai, who was accused of the murder in November 1944 of 18-year-old Peter Balasz," it said.

The Simon Wiesenthal Center said Zentai allegedly killed the Jewish teenager "whom he caught on a tram without the yellow star required of all Jews," and took part in manhunts for other Jews in Budapest in 1944.

"Countries like Lithuania, Latvia, Estonia and the Ukraine consistently failed to hold any Holocaust perpetrators accountable, primarily due to a lack of the requisite political will," according to the report.

It added that Sweden and Norway "refuse to investigate, let alone prosecute, due to a statute of limitations."

German investigators said on Saturday they were on the trail of dozens of former guards at Auschwitz, the concentration camp in occupied Poland which operated between 1940-1945. An estimated 900,000 people - mostly Jews - were killed in the camp's gas chambers, while 200,000 others died through other means, including hunger, sickness or executions carried out by members of the SS.

The suspects are all around 90 years old and live in various parts of Germany, according to the head of the Central Office of the State Justice Administrations for the Investigation of National Socialist Crimes.

In a report published in the Saturday editions of newspapers from Germany's WAZ media group, Kurt Schrimm also said that his investigators not only had names, but also knew where the suspects lived. Preliminary investigations were to be launched in the next few weeks.