Germany international Julian Brandt has signed a contract extension with Bayer Leverkusen to keep him at the Rhineland club until 2021. The Confederations Cup winner had been the subject of interest from Bayern Munich. 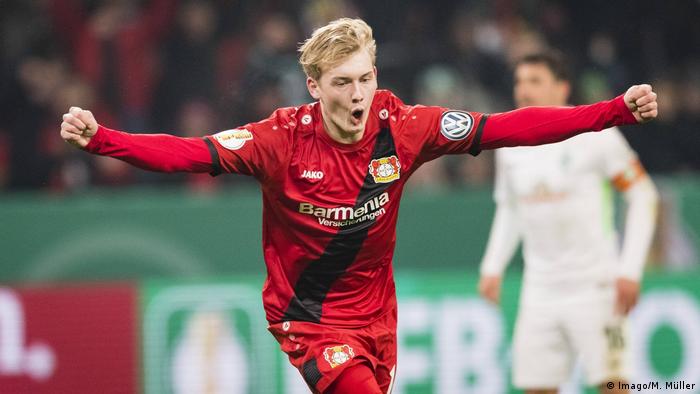 The 21-year-old attacking midfielder joined "the Werkself" in January 2014 and has since developed into one of Germany's top talents.

"I feel completely at home here and I can see that something good is growing," Brandt said in a statement on the club's website. Brandt added his decision was influenced by teammates Jonathan Tah and Lars Bender, who have also recently signed contract extensions.

"Like me, they're both convinced that we can achieve something special with this team," he said. "We want to win titles and I'm looking forward to working towards that with the lads and taking more responsibility within the team."

Brandt - who played a key role in Germany's silver-winning Olympic team in Rio de Janeiro in 2016 - had been the subject of interest both at home and abroad, including from German champions Bayern Munich. The Bremen-born forward has decided to remain in Leverkusen though, which sporting director Rudi Völler says is testament to his "character, ambition and courage."

Club manager Jonas Boldt believes Brandt's decision also says a lot about the situation at the club - Leverkusen are currently fifth in the Bundesliga and in the semifinals of the DFB Pokal.

"The fact that [Brandt] has said: 'I'm definitely staying!' sends a huge message," Boldt told broadcaster Sky. "Players can see that Bayer Leverkusen stands for consistency. Here, we give young players the opportunity to play and develop."

Since joining from Wolfsburg's U19s, Brandt has made 165 appearances for Leverkusen in all competitions, scoring 24 goals and assisting 25 more. This season, he has been directly involved in 15 goals in 32 games under new coach Heiko Herrlich.

Leverkusen travel to Leipzig on Monday night where a victory would see them return to the top-four.