After two days of disappointment on the mat for Brazil, the host nation have picked up their first gold. Rafaela Silva, who grew up in Brazil's largest favela, claimed victory in the 57kg judo division. 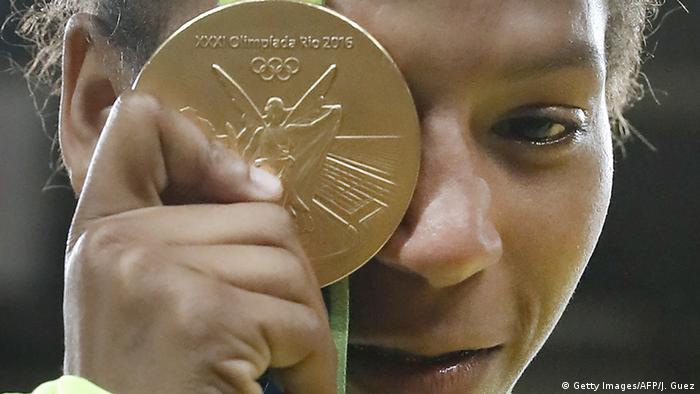 Silva, the country's first female world champion in judo, won the 57-kilogram division of the Japanese martial art on Monday as the crowd chanted "Rafa" and waved the green and yellow Brazilian flags.

The 24-year-old Silva beat Sumiya Dorjsuren of Mongolia following two days of disappointment on the mat for Brazil.

She also settled an old Olympic score. At the 2012 London Games, Silva was disqualified for an illegal leg grab during a fight against Hedvig Karakas of Hungary. This time, it was Silva who advanced from their quarter-final match.

Silva, who is from Brazil's largest favela and trained at a judo dojo founded by former Olympic bronze medalist Flavio Canto, was in top form for much of the day. Her first match lasted only 46 seconds.

"Everybody here knows Rafaela's history," said Eduardo Colli, a Brazilian fan watching the final in the stands. "This is more than just a medal, it's a victory for poor people. It's hope for all of them."

The women's bronze medals went to Kaori Matsumoto of Japan - the defending Olympic champion - and Telma Monteiro of Portugal.

With its strong martial arts culture - including many shared techniques between Brazilian jiu jitsu, mixed martial arts and judo - Brazil had been expected to do well early on in the judo competition.

But defending Olympic champion Sarah Menezes narrowly lost out on a bronze on Saturday in the 48kg category, and so did Erika Miranda at 52kg on Sunday.