Given Borussia Dortmund's strong recent history of developing young players with high potential, Jude Bellingham's signing makes perfect sense. But does it help them challenge Bayern Munich for the title? Jude Bellingham's arrival at Borussia Dortmund proves the club is one of the best places to go for young players ready to take the next step.

It was that history that won him over, the history that has become Borussia Dortmund's modern-era business model. Buy young and cheap, develop and, hopefully, sell for a big profit is an approach that works for many. In the Bundesliga, Borussia Mönchengladbach have been following the same approach with smaller fees for a while thanks to the shrewd efforts of sporting director Max Eberl. This approach wins games, but it has not won many teams of late titles.

And challenging for the title is the expectation with which Dortmund have to contend. During last season's exciting title race, it was telling that Gladbach and RB Leipzig, two teams with the aim of finishing in the top four, were seen as possible bringers of change. Dortmund, whether they like it or not, will always be seen as the team hunting Bayern.

They are the last team to win the Bundesliga other than Bayern, boast a host of international players in their current squad, scored a club record number of goals last season (84) and, when filled, have one of the most intimidating and impressive stadiums in Europe. Dortmund are the obvious candidates. Only last season, though, did club boss Hans-Joachim Watzke and sporting director Michael Zorc publicly state winning the title was the goal.

Why, then, has the club spent the €23 million ($26 million) on a teenager that is unlikely to help them win now?

Dortmund are caught between their business model and expectation. Signing a 17-year-old with, as Zorc said, "astonishing quality with and without the ball," is the classic modern era Dortmund move. And should Bellingham eventually turn into one of the best midfielders in Europe, then Dortmund will round it off by enjoying some of his best early years before turning a profit on the midfielder.

Perhaps Bellingham can quickly become a key player. Given the fee, the expectation is certainly there for him to do so, but to place such a burden on the teenager so soon could do more harm than good. Furthermore, while different people and players, it is worth noting that Jadon Sancho needed a season before he started to look anything like the player he currently is. 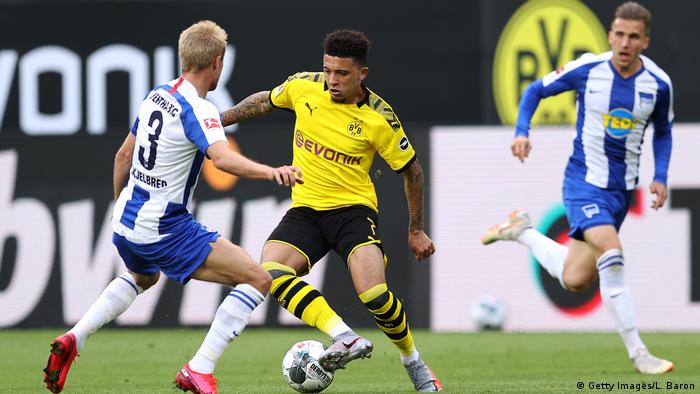 Jadon Sancho needed time to develop, but does he also see Dortmund as a step rather than the big move?

Dortmund are buying for the long term while also having to contend in the short term. After all, while Bellingham develops, Dortmund have a title to try and win.

With Bayern Munich reaching levels of ruthlessness under Hansi Flick not seen since Pep Guardiola was in charge, and Leroy Sane arriving, that challenge is admittedly much harder for Dortmund. It is not one remedied by simply signing more experienced players either, as the recent acquisitions of Axel Witsel and Emre Can, two strong midfielders who have won titles, shows. What needs to change is how Borussia Dortmund are viewed, which in turn is linked to player retention.

As the departure of Achraf Hakimi, one of the club's best players last season, and the constant speculation around Sancho proves, Dortmund are a stepping-stone club. Not quite in Europe's elite but equally clear of the chasing pack, Dortmund is a place where young players can play in the first team, taste the Champions League, and face Bayern Munich. This the club where you get better, experience the amazing atmosphere of the Yellow Wall and play exciting football. It is not the club where you win.

Win now, or wait until later?

There is nothing wrong with that, especially not when you are as good at developing players as Dortmund are. Except, of course, if you want to be a club that wins titles.

Clearly, Dortmund now want to do that. But, at least in the Bundesliga, clubs cannot be both developer and winner. After all, while Bayern Munich were winning title after title, it was only until this season with the emergence of Joshua Zirkzee and Alphonso Davies that players made it through the academy and reserve teams and members of the first-team squad.

If Dortmund want to win, they must change the modern perception of the club, from one that players use to one that players choose. Part of making that change is making sure that players like Bellingham don't just see the development in the likes of Christian Pulisic, Jadon Sancho and Ousmane Dembele and think: "Look what it did for their careers."

The club need to change Bellingham's expectations about what a move to Dortmund means. In doing so, perhaps he can help change their expectations, too.

Bayern Munich's Karl-Heinz Rummenigge: 'Football does not belong to the fans'

One of Germany's most prestigious goal scorers has retired. Mario Gomez, who was part of Bayern Munich's treble winning team in 2013, calls it quits after helping his boyhood team get back into the Bundesliga. (29.06.2020)