Manchester United coach Jose Mourinho has said that he has settled his tax fraud case in Spain. He had been accused of defrauding the Spanish tax authorities of millions of euros between 2011 and 2012. 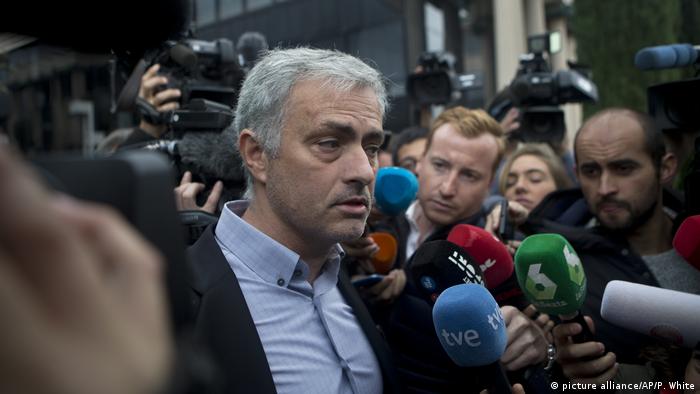 Jose Mourinho has said his tax fraud case is now "closed" after he paid the money he owned to the Spanish tax authorities dating back to his time in charge of Real Madrid.

The current Manchester United coach made the statement outside of a courthouse on the outskirts of Madrid, where he appeared briefly before a judge on Friday morning to answer questions regarding accusations of tax fraud.

The 54-year-old Mourinho had been accused by Spanish prosecutors of defrauding the county's tax authorities of €3.3 million ($3.8 million) in unpaid taxes between 2011 and 2012. The money in question concerned revenues from image rights, not his salary from Real Madrid.

Leaving the tribunal in Pozuelo de Alarcon in the northwest of the Spanish capital in the company of his lawyers, Mourinho said: "It's simple. I left Spain in 2013 with the information and conviction that my situation with the tax authorities was perfectly legal. Then I was informed that an investigation was opened and they told me that in order to regularize my situation I had to pay a certain amount of money."

"I did not complain or appeal," he continued. "I paid and I signed an agreement and a compliance act with the state, saying that everything was closed. For this reason I was here only for five minutes to say the same things I am telling you."

The judge will now decide whether or not the case will proceed to trial.

Following the announcement of the tax fraud allegations in June, Gestifute, the agency which represents Mourinho, released a statement saying their client had paid "more than 26 million euros in taxes, with an average tax rate over 41 percent, and accepted the regularization proposals made by the Spanish tax authorities in 2015 regarding the years of 2011 and 2012 and entered into a settlement agreement regarding 2013."

The agency also published copies of a certificate issued by Spanish tax authorities attesting that Mourinho was in compliance with all of his tax obligations.

Mourinho is the latest in a long list of high-profile football figures to be targeted in Spain. Last year, Barcelona star Lionel Messi and his father were found guilty of defrauding the authorities of €4.1 million of taxes in image rights revenue.

Mourinho takes his Manchester United team to face his former club Chelsea in the English Premier League on Sunday.