Joe Biden won four of the six US states where Democrats were voting for their presidential nominee. Despite the blow, rival Bernie Sanders did not end his campaign. 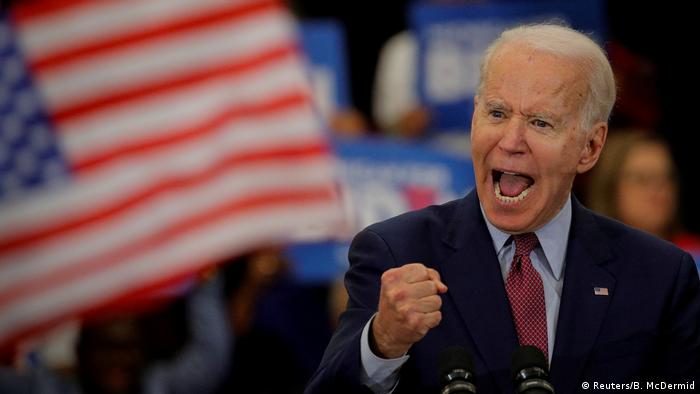 After key wins on "Big Tuesday," Joe Biden reached out to rival Democratic hopeful Bernie Sanders in a bid to unify the party, saying, "Together we'll defeat Donald Trump."

"I want to thank Bernie Sanders and his supporters for their tireless energy and their passion," he said at a conference. "We'll bring this nation together."

Biden has won the states of Idaho, Michigan, Missouri and Mississippi, while Sanders was victorious in North Dakota.

The state of Washington was still too close to call, as ballots there are either sent by mail or dropped in a ballot box, but Sanders was leading by several thousand votes with partial results counted.

Addressing his supporters in his home state of Vermont, Sanders defied expectations he would suspend his campaign.

"Poll after poll shows that the majority of the American people support our progressive agenda," he said, although he did acknowledge he was losing the "electability" debate, implying Democrats were rallying around Biden simply because they believe he has a better chance of beating President Donald Trump.

Sanders added that the Democrats had to present a substantial challenge to Trump, who he called a "pathological liar, a homophobe, a racist...and a religious bigot."

Bidden and Sanders will face off in a debate on Sunday.

How did the polls play out?

As six US states went to the polls to select their Democratic candidate for the 2020 presidential elections, front-runners Biden and Sanders faced each other in a race for over 350 delegates.

With 125 delegates, all eyes were on Michigan, followed closely by Washington, which had 89 delegates to offer. Missouri (68), Mississippi (36), Idaho (20) and North Dakota (14) finish the round-up. Overall, this round of voting made up close to 10% of the total delegates in the Democratic race.

Following a stellar performance at "Super Tuesday" last week, Biden, the former vice president, took a comfortable lead against Sanders, after some disappointing results in the initial states. Sanders, who suffered a setback in some important states like Texas and North Carolina, hoped to make a comeback with Michigan.

Polling out of the state, however, showed that Biden had a comfortable lead over the Vermont senator, as the moderates and centrists of the Democratic Party rallied around Biden's campaign. Many former Democratic hopefuls, including Senator Kamala Harris, businessman Andrew Yang and more, have endorsed Biden.

Sanders' platform is considered more progressive, laying emphasis on a complete overhaul of the country's health-care system, affordable higher education and criminal justice reform. Biden's, however, is seen as a return to normalcy from the Barack Obama-era.

While the Democratic race began with over 20 candidates running for the nomination, big names like Senator Elizabeth Warren, Mayor Pete Buttigieg and businessman Mike Bloomberg stepped out of the running after disappointing results in the initial phase. Biden, Sanders and Rep. Tulsi Gabbard are still running, but Gabbard only has two delegates.

Biden, alongside Sanders, had to cancel a campaign rally late Tuesday amid coronavirus fears.

Bernie Sanders and Joe Biden are fighting to be the presidential candidate for the US Democrats. Biden is now the frontrunner in the race for the Democratic nomination. (04.03.2020)

The end of her campaign follows big losses in all 14 "Super Tuesday" states. Her withdrawal leaves just former Vice President Joe Biden and Senator Bernie Sanders in the democratic race. (05.03.2020)

USA: Who will battle Trump?