Thousands of people have joined a remembrance march through the former Nazi death camp at Auschwitz on Israel’s Holocaust Memorial Day. More than 1.1 million people were murdered there during World War II. 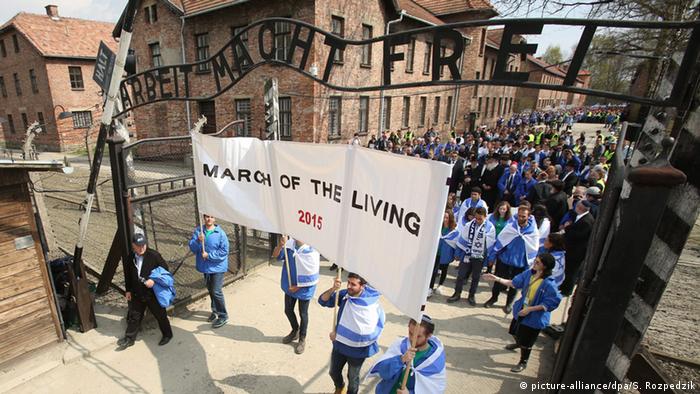 Several thousand young Israelis waving their nation's flag took part in the annual three-kilometer (two-mile) "March of the Living" at Auschwitz on Thursday, just over 70 years after the Nazi camp was liberated.

The march, held on Israel's Holocaust Memorial Day, is a symbolic trek from Auschwitz to Birkenau - the two sections of the biggest death camp complex, located in the south of then-occupied Poland.

More than 1.1 million Jews, Roma, gypsies and others were gassed to death at the vast site, before it was liberated by Red Army soldiers on January 27, 1945. There were about 7,000 survivors.

Christoph Heubner of the International Auschwitz Committee told German news agency DPA that this year's march had taken on a greater significance following recent attacks on Jewish targets in Paris and Copenhagen.

"To be again confronted in old age with the deadly hatred of anti-Semitism has deeply shaken the survivors," Heubner said.

The "March of the Living" was one of a number of ceremonies taking place on Thursday to remember the 6 million Jews killed by the Nazis during the Holocaust.

Israel held a nationwide two-minute silence at 10 a.m. local time (0700 UTC/GMT). Traffic and pedestrians came to a halt as sirens rang out to signal the beginning of a public wreath-laying service at the Yad Vashem Holocaust Memorial Center in Jerusalem.

Commemoration ceremonies are planned at schools, colleges and universities throughout the day, including a service in parliament in the afternoon.

Earlier, in a speech to kick off this year's ceremonies, Israel's Prime Minister Benjamin Netanyahu said the world had not learned the lessons of World War II, and went on to compare Germany's Nazi regime with Israel's arch-foe, Iran.

Netanyahu also explicitly criticized a framework agreement reached by Iran and the five permanent members of the UN Security Council plus Germany (P5+1) earlier this month.

Nord Stream 2: Construction of disputed pipeline to restart in December 5h ago