Jewish judge to investigate war crimes in Gaza | World | Breaking news and perspectives from around the globe | DW | 03.04.2009

The UN has appointed a Jewish judge from South Africa to head a high-level mission to investigate alleged war crimes committed by Israel in the Gaza Strip. 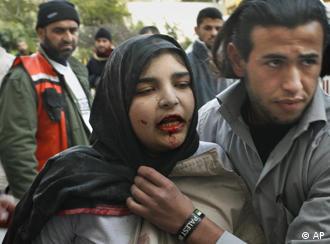 The investigation will focus on Palestinian victims of the war

The former chief prosecutor of the international courts for Yugoslavia and Rwanda, Richard Goldstone, has served on the board of Human Rights Watch and the Nobel-winning Physicians for Human Rights. He teaches at Harvard and New York University.

He led a commission which aimed to allow the non-violent transfer of power in South Africa from apartheid rule to its current democracy, after passing rulings as a judge which weakened racial segregation.

Goldstone also headed the investigation into the oil-for-food program in Iraq.

Other members of the mission looking into violations during the recent Israeli offensive in the coastal enclave will include Pakistani lawyer Hina Jilani and British human rights professor Christine Chinkin.

The appointments were made by the president of the United Nations Human Rights Council, Martin Ihoeghian Uhomoibhi, in Geneva. They followed a special session in January during which the 47 member states agreed to send a mission to Gaza.

The investigation will focus only on Palestinian victims of the three-week war between Israel and Hamas earlier this year.

EU Ties with Israel Under Threat Over Palestinian Statehood Policy

The European Union on Friday told Israel's incoming new government Friday that there would be "consequences" if it did not accept Palestinian calls for statehood. (28.03.2009)

The EU, US and Arab states have pledged close to $4.5 billion (3.6 billion euros) to help rebuild the war-torn Gaza Strip and reform the Palestinian Authority. (02.03.2009)

EU diplomats urged the next Israeli government not to abandon the two-state solution and raised concerns over PM designate Benjamin Netanyahu's commitment to the Middle East peace process. (23.02.2009)