A Jewish cemetery in eastern France has been desecrated in an act of anti-Semitic vandalism. The French interior minister has promised to do "everything" to catch the culprits. 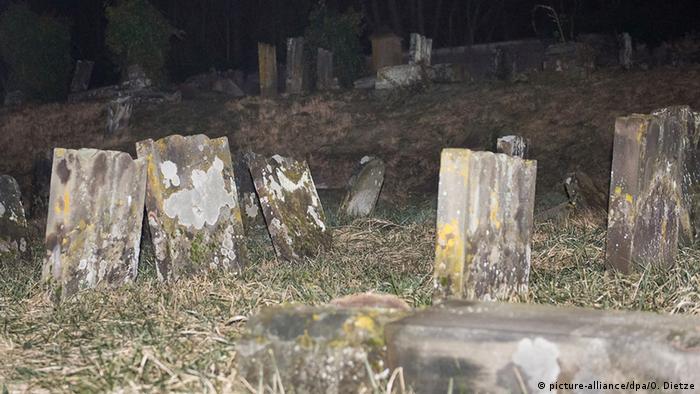 Hundreds of graves at a Jewish cemetery in France's Alsace region were vandalized on Sunday, in what Interior Minister Bernard Cazeneuve has called "a despicable act" against religious freedom and tolerance.

"The country will not tolerate this new injury which goes against the values that all French people share," said Cazeneuve, without offering further details about the incident in the town of Sarre-Union, near the German border.

"Every effort will be made to identify, question, and bring to justice the person or persons responsible for this ignominious act," Cazeneuve added. He also urged calm, as many French Jews feel increasingly worried about anti-Semitism one month after an Islamist gunman killed four Jews at a kosher supermarket in Paris.

It's not the first time a Jewish cemetery in Sarre-Union has been desecrated. In 1998, 60 commemorative slabs were knocked over and in 2001, 54 tombs were wrecked.

Jewish and Muslim gravesites see sporadic but frequent vandalism in France. A similar incident, pictured above, took place in 2004 in Herrlisheim, also in Alsace.

Israeli Prime Minister Benjamin Netanyahu has called for a "mass immigration" of European Jews. His announcement followed two fatal attacks in Denmark in which one Jewish man was shot dead near a synagogue. (15.02.2015)