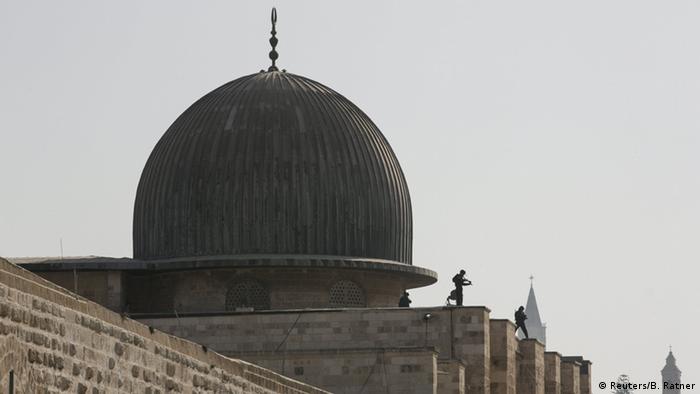 Apart from a brief scuffle between Israeli security forces and members of the Waqf, a Jordanian organization that administers the Al-Aqsa mosque, Wednesday passed without any major clash at Jerusalem's holy site.

The Palestinian protesters and Israeli forces had clashed several times during the past three days at the mosque's compound, following Palestinians' attacks against Israelis that killed one citizen during the Jewish New Year holiday of Rosh Hashanah.

The hilltop in Jerusalem's old city is sacred for both Jews and Muslims. It is considered the third-holiest site in Islam, called the Noble Sanctuary, while Jews refer to it as the Temple Mount.

Non-Muslims are forbidden from praying there, and can only visit during certain hours. There have been frequent outbreaks of violence at the site, with protesters fearing Israel may move to change the rules amid a campaign by right-wing Jews to get more access to the area.

On Tuesday, Israeli police entered the mosque compound to disperse a group of protesters who had barricaded themselves inside overnight. According to agency reports, a number of troops entered the compound and deployed stun grenades and tear gas, as protesters hurled rocks, fireworks, concrete blocks and firebombs at them.

Israeli Prime Minister Benjamin Netanyahu held an emergency meeting with security officials on Tuesday night to discuss the situation on Temple Mount. The premier vowed "war" on the "rioters" and said his administration would push for tougher penalties and changes in rules for when to open fire.

"This stone is one too many," Netanyahu said. "We are declaring war on those who throw stones and bottles, and rioters."

The Israeli prime minister also said the authorities planned to "massively increase fines for minors and their families" involved in creating unrest.

The United Nations, the United States and the European Union have issued calls for calm.

"The reported violence and escalation [at the site] constitute a provocation and incitement" ahead of important Jewish and Muslim holy days, European Commission spokeswoman Maja Kocijancic told reporters in Brussels on Tuesday.

"It is crucial that all parties demonstrate calm and restraint and full respect for the status quo of the holy sites," Kocijancic said.