Emperor Naruhito and Empress Masako have welcomed their first foreign dignitary to the Imperial Palace. US President Donald Trump has attended a state banquet ahead of talks with Japanese Prime Minister Shinzo Abe. 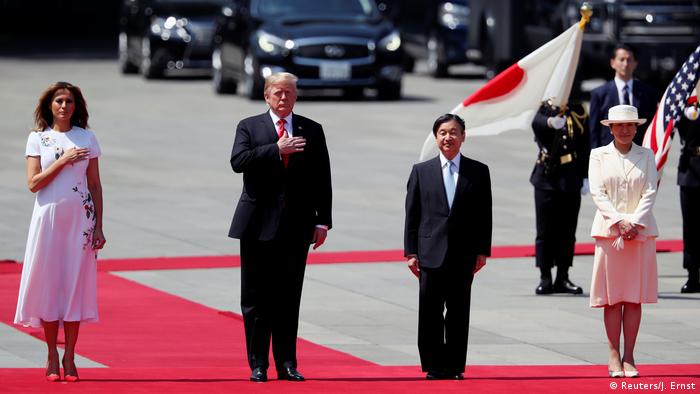 Donald Trump said on Monday that it was "a great honor and a great thing" to meet Japan's new emperor.

On May 1, Naruhito succeeded his father Akihito,  who became the first Japanese emperor to abdicate in 202 years.

Trump — who is in Japan with his wife, first lady Melania Trump, for a four-day state visit — is the first world leader to meet Naruhito since his enthronement.

Trump also expressed a desire to quell increasing tensions between the US and Iran; however, the Iranians have said they are not interested in talking with Washington. Trump appeared to consider his improved ties with Tokyo as a possible way forward.

"I know that the prime minister and Japan have a very good relationship with Iran so we'll see what happens," he said during a meeting with Abe in Tokyo.

In a nod to increased fears of a military conflict in the Persian Gulf, Trump said: "We're not looking for regime change, I just want to make that clear. We're looking for no nuclear weapons."

The US recently issued new sanctions targeting Iran's oil exports, and has deployed 1,500 US troops and an aircraft carrier strike group to the region.

Relations between the two countries have been soured by a dispute over Tehran's 2015 nuclear agreement with the international community. Washington pulled out of the deal last year, but has been unable to convince other countries to follow suit, despite threats of sanctions for continued trade with Iran. Iran recently announced it would stop implementing some of the agreement's key provisions.

Read more: Pompeo in Russia: US does not want 'war with Iran'

Abe said he has won Trump's support for a proposed meeting with North Korea's leader Kim Jong Un over the emotional issue of Japanese people who Tokyo believes were abducted by North Korean spies in the 1970s.

Trump also said that he had a good feeling that a nuclear standoff with North Korea, which is located across the sea of Japan from Tokyo, will be resolved.

"I may be right, I may be wrong. But I feel that we've come a long way. There's been no rocket testing, there's been no nuclear testing." Trump also said he's not bothered by short-range missile tests North Korea conducted earlier this month. 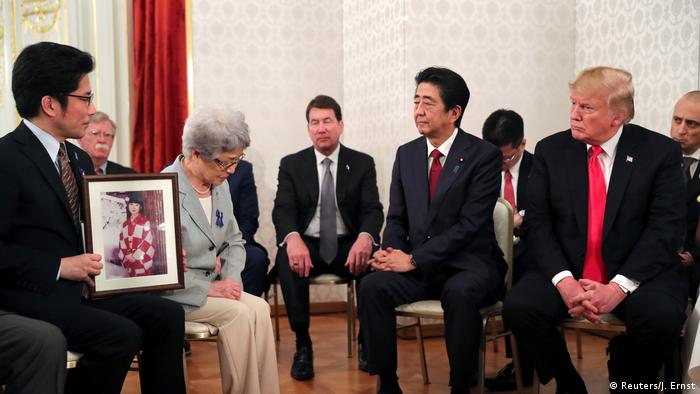 'Japan to buy US warplanes'

Trump said on Monday that Japan "has just announced its intent to purchase 105 brand new F35 stealth aircraft. ... This purchase would give Japan the largest F35 fleet of any US ally." Trump had earlier expressed a desire to "do a little business" with Japan.

"We have to do a little catching up with Japan," he said. "They've been doing much more business with us. We'd like to do a little business in the reverse. We'll get the balance of trade straightened out rapidly." Trump had threatened to slap tariffs on Japanese cars and car parts.

Japan's new emperor: Who is Naruhito?

Japan's newly crowned emperor, Naruhito, has said he wants to continue the work of his father in bringing the monarchy closer to the people. But he faces personal and public challenges. Martin Fritz reports. (01.05.2019)

Donald Trump calls for more Japanese investment in US

At the start of a four-day visit, US President Trump has called on Japanese business leaders to boost investment in the US. Trump is hoping to secure a trade deal to curb what he described as Japan's "substantial edge." (25.05.2019)

Brussels and Tehran want to ensure the nuclear deal's survival, despite Washington's withdrawal. What will delegates be discussing at their meeting with Iran's foreign minister? DW's Bernd Riegert reports. (15.05.2018)