Kazuyoshi Miura, 53, has now played professionally across five separate decades. The veteran's appearance in the J-League makes him the oldest player to take to the pitch in Japan's top flight soccer league. 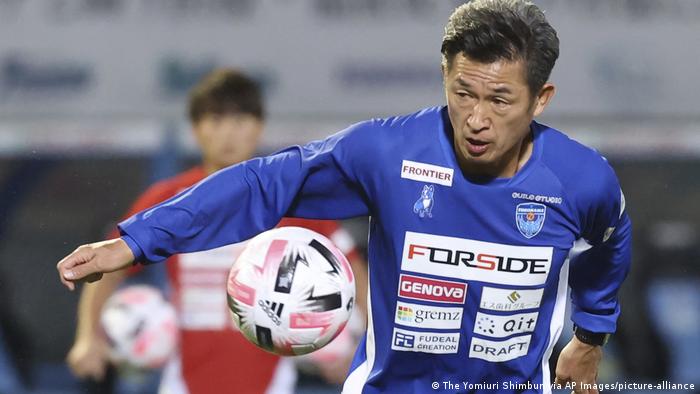 Kazuyoshi Miura became the oldest footballer to ever play in Japan's top division J-League when he took to the pitch for Yokohama FC on Wednesday at the age of 53.

The former Japanese international, who was among the starting 11 on Wednesday, wore the captain's armband for 56 minutes for his longtime club before being substituted in the 3-2 loss to Kawasaki Frontale.

"When I stepped onto the pitch, I felt a deep desire to fulfill my duty and harness everyone'S feelings in that armband," said Mirua, according to Kyodo news agency.

The previous national record was Masashi Nakayama, who was 45 when he played for Consodale Sapporo in 2012. His 53rd birthday was Wednesday.

Miura was not the only long-time veteran on the pitch on Wednesday. Former Japan and Celtic midfielder Shunsuke Nakamura, 42, was also in Yokohama's starting line-up.

Miura, better known as "King Kazu," began playing the game in Brazil in 1986. He bounced around from club to club until 1990, when he returned to Japan to play for Yomirui FC. The 1990s were mostly spent with Verdy Kawasaki, with brief stints in Genoa and Dinamo Zagreb.

He played for Kyoto Sanga and Vissel Kobe at the turn of the millennium before joining Yokohama FC, where he has remained since 2005.

Miura signed a year-long contract with Yokohama FC in January of this year, marking his 35th professional season. He played in three matches for the side last season, in which they were promoted from the second division.

Wednesday's appearance was his first top-flight match since 2007.

Miura won the 1992 Asian Cup with Japan's national side. He is the second-best all time scorer for the Japanese national team with 55 goals between 1992 and 2000.

The veteran also briefly took his game indoors, playing for Japan in the 2012 FIFA Futsal World Cup. He did not score any goals as Japan was knocked out in the Round of 16.