The names of Abe, his wife and the finance minister were removed from a document linked to an alleged land-sale scandal. The cover-up could dent Abe's support. 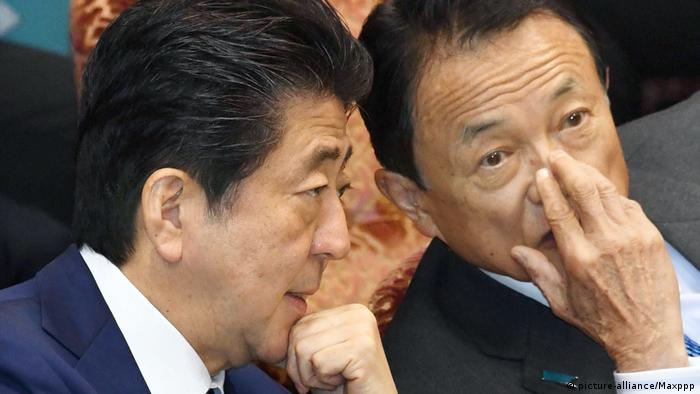 The scandal first emerged last year following the sale of state land in Osaka for a fraction of the appraised price to a right-wing school operator with ties to first lady Akie.

Finance Minister Taro Aso admitted "some staff members" at the ministry made 14 changes to official documents, but that he did not believe it was done to protect Abe.

Opposition lawmakers released the original and changed documents on Monday, showing that Abe's name, that of his wife and Aso were removed.

"Changing official documents is very grave and extremely regrettable and I deeply apologize," Aso said at a press conference. "What is important is that these things don't happen again. We are fully cooperating with the investigation."

Aso has refused to resign over the scandal, which last Friday saw the head of the tax agency Nobuhisa Sagawa step down.

Sagawa was in charge of the finance ministry department responsible for the land sale before being promoted to head the tax agency. A finance ministry official linked to the scandal was also found dead last week in an apparent suicide.

Aso said the documents were altered to make them conform with Sagawa's testimony in parliament.

Opposition lawmakers accuse private school operator Yasunori Kagoike of using his ties to Abe and his wife Akie to secure the cut-rate price of the property.

Akie was named honorary principal of the school that was planned to be built on the plot. She later stepped down when the scandal emerged.

The document doctoring scandal may damage Abe, who has denied any role in the land sale but said he would resign if linked to it.

Read more: One in four forced to pay bribes in Asia - report

Eight out of 10 respondents said the government was not properly responding to the allegations.

Abe is seeking re-election as head of the Liberal Democratic Party in September.

Can Japan compete with China over development aid?

Japan is rethinking the ways in which its official development assistance is provided to developing nations in order to promote its vision for a "free and open Indo-Pacific strategy." Julian Ryall reports from Tokyo. (22.02.2018)

The Japanese government has approved plans for raising the optional age for drawing public pensions to 71 or older. It is trying to grapple with labor shortages, ballooning welfare costs and an ageing population. (17.02.2018)

Australia, the US, India and Japan are talking about plans for a regional scheme to counterbalance China's growing influence, a report says. A US official spoke of an "alternative" rather than a "rival" plan. (19.02.2018)