An unmanned Japanese space probe has successfully touched down on an asteroid some 340 million kilometers from Earth. Hayabusa2 will collect material that could help answer questions about the origin of life. 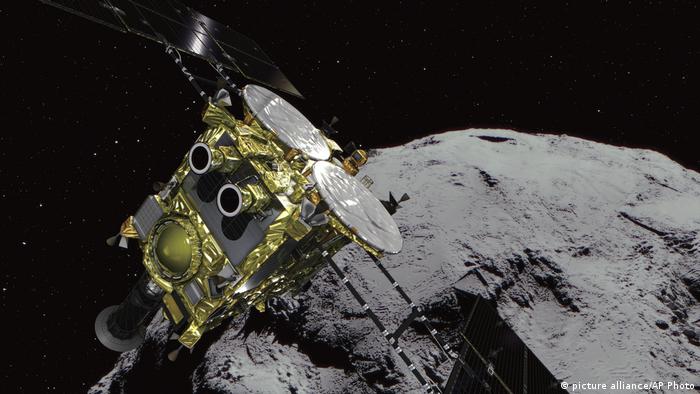 Employees at the Japan Aerospace Exploration Agency (JAXA) rejoiced on Friday as the Hayabusa2 explorer signaled that it landed on a distant asteroid.

The unmanned spacecraft touched down briefly on the asteroid and then indicated that it was blasting back to its orbiting position.

If successful, the probe will be able to collect samples that will eventually be brought back to Earth. It could take several days to confirm whether Hayabusa2 was able to fire the bullet during its touchdown.

Three other touchdowns are planned before Hayabusa2 starts the journey back home, with the explorer expected to return at the end of 2020.

Unlocking the secrets of the solar system

The Ryugu asteroid that the explorer landed on is named after an undersea palace in a Japanese folktale. It is around 900 meters (3,000 feet) in diameter and is located around 280 million kilometers (170 million miles) from Earth.

Scientists believe the asteroid contains a relatively large amount of organic matter and water from when our solar system was born some 4.6 billion years ago.

By firing the projectile into the surface of the asteroid, Hayabusa2 should be able to gather "fresh" material from deeper down that hasn't been affected by billions of years of radiation and solar winds.

The samples gathered on Ryugu could help answer questions about the origins of life and the solar system, including whether elements from space aided the rise of life on our planet.

Besides this mission, Hayabusa2 carried four payloads to the asteroid, including three rovers and the Mobile Asteroid Surface Scout (MASCOT) lander that was built by the German Aerospace Center (DLR) and the French space agency (CNES).

The rovers successfully landed in September, followed the next month by MASCOT which collected data from the surface of the asteroid.

Can the Hubble Telescope look back in time?

Hayabusa2: Capsule with asteroid samples scheduled to return to Earth 04.12.2020

The Japanese space probe Hayabusa2 is to deliver samples of asteroid Ryugu to Earth this Saturday night. A year and a half ago, it extracted dust and rocks in an elaborate maneuver.

The capsule from the Japanese space probe has landed in the Australian desert. Scientists are hoping for a treasure trove of information about the solar system and life on Earth from tiny samples of the asteroid Ryugu.

A Japanese mission called Martian Moons eXploration aims to be the first to bring back rocks from the Mars region. It could also help humans land on Phobos.