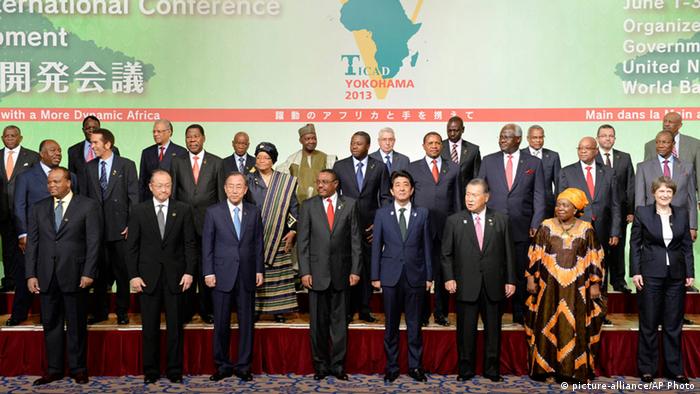 Japanese Prime Minister Shinzo Abe told leaders and delegates from 50 African nations while opening a conference in Yokohama on Saturday that Japan intended to "revolutionize" its investment in Africa by focusing on private-sector investment in infrastructure.

Abe, who took office late last year, said nearly half the sum would be offered for projects in Africa such as transportation, education, farming, energy projects and water sanitation.

Japanwould invite 1,000 students to study at universities and gain experience as interns at Japanese companies, Abe said. Japan would also strive to find jobs for 30,000 people in Africa.

"Japan will also construct hubs for human resource development at 10 locations in the field in Africa, including in Ethiopia and Senegal. We will send experts in vocational training to these hubs," Abe said.

Abe's initiative follows his pledge last month to treble Japan's infrastructure-related exports by 2020 as part of his plan to reanimate a Japanese economy hit by slowing consumer demand, partly due to demographic aging.

Djibouti's President Ismael Omar Guelleh told the conference that a dearth of roads and ports across Africa was costing African nations two percent growth each year.

South African President Jacob Zuma said Africa must diversify from "a path driven by commodities export to one led by industrialization."

The three-day conference in Japan – held every five years since 1993 and showcasing Japanese firms and their products - is co-organized by international organizations such as the United Nations, the World Bank and, for the first time, the African Union.

Japanese officials stressed that Tokyo wanted to transform its relationship with Africa from that of donor-recipient to a business partnership.

In an apparent reference to China, Abe said Tokyo's commitment to Africa differed from that of other nations.

State-owned Chinese oil and mining companies have multibillion-euro investments in Africa as well as Australia and Latin America. According to the Washington-based Center for Global Development, Beijing has invested $75 billion (57 billion euros) in Africa over the past decade.

UN Secretary-General Ban Ki-moon said during the conference in Japan that the merits of investing in Africa were clear.

"Millions of Africans still lack jobs, health care and food," Ban said. "Too many suffer in conflict. To find solutions, we must address the links between peace, security and government."