Japan to deploy warship and planes to Middle East

Japan's government confirmed it would send a destroyer and two patrol planes to the Middle East to protect ships in volatile seas off the coast of Iran. The deployment is mostly for information-gathering purposes. 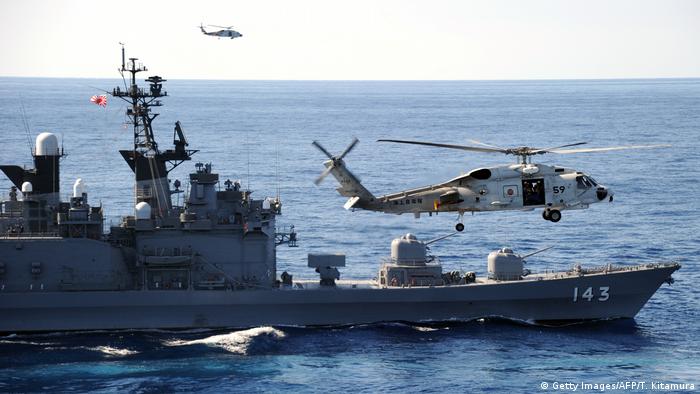 Japan will send a warship and patrol planes to the Middle East to protect Japanese ships in the region, a document approved by the Cabinet showed on Friday.

A helicopter-equipped destroyer and two P-3C patrol planes will be deployed to gather information and ensure the safety of Japanese ships around the Gulf of Oman and the Arabian Sea, near Iran's coastline.

A total of 206 personnel from Japan's Maritime Self-Defense Force will accompany the year-long mission, and the deployment could begin as early as the end of January, reported Japan's Kyodo international news agency, citing government sources.

Japan sources nearly  90% of all its crude oil from the region which saw a succession of attacks on international merchant vessels during May and June. The attacks included one launched against the Japanese-owned tanker Kokuka Courageous. The US has blamed Iran for the attacks but Iran denies this.

If there are any emergencies, a special order would be issued by the Japanese defense minister to allow the forces to use weapons to protect ships in danger.

Strait of Hormuz not included in the mission

The mission will be carried out in the Gulf of Oman, the northern part of the Arabian Sea, and the Bab el-Mandeb Strait connecting the Red Sea and the Gulf of Aden. The Strait of Hormuz is not included in the area to be covered by the Japanese mission.

Iran's President Hassan Rouhani acknowledged Japan's planned deployment to these areas after Japanese Prime Minister Shinzo Abe notified him of his intentions during a two-day visit to Iran last week . In June, Abe had visited Rouhani and Supreme Leader Ayatollah Ali Khamenei in Tehran, marking the first time in 41 years that a Japanese prime minister had traveled to Iran.

Japan's decision to send the ships to the region for a stand-alone mission comes as the country chose not to join a seven-country US-led task force to protect ships through the Strait of Hormuz — a mission that Iran has criticized.

Britain says it will join a US-led mission to protect merchant vessels in the Strait of Hormuz. Germany has rejected joining the mission, which comes amid heightened tensions between Iran and the West. (05.08.2019)