A new hazard map suggests that as many as 1.3 billion cubic meters of lava could flow from the crater. Some experts say, however, that the heightened warnings are causing unnecessary fear. 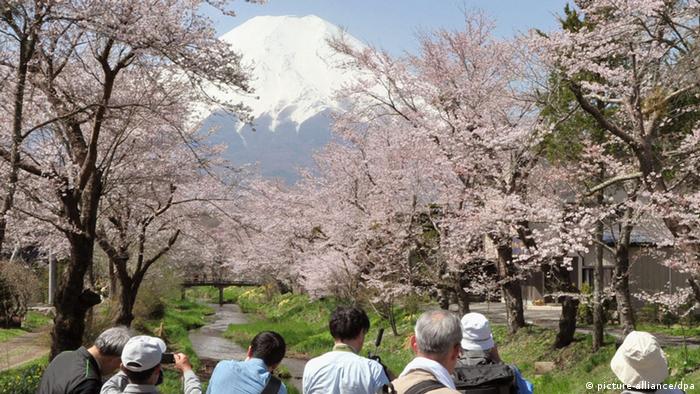 A new hazard map drawn up to prepare local residents for a possible eruption of Japan's Mount Fuji warns that earlier predictions may have underestimated the true scale of the danger.

The updated threat assessment was compiled by experts from the three prefectures considered to be most at risk from a major eruption of Japan's tallest and most iconic mountain. Basing their decisions on new research, officials in Shizuoka, Yamanashi and Kanagawa prefectures now believe that the earlier hazard map, which was published in June 2004, failed to take several factors into account.

The new report identifies a number of additional vents on the flanks of the mountain that could serve as exit points for the lava that is below the surface, potentially putting more communities at the base of the peak in danger. The experts believe that 27 towns are at some degree of risk should the volcano erupt, up from 15 in the previous study.

The report identifies the city of Fujinomiya, to the southwest of the 3,776-meter (12,388 feet) peak, as one of the most at-risk communities, with lava flowing into parts of the town within two hours of an eruption and engulfing a far wider area.

And while lava generally flows at a relatively slow speed of 10 kilometers per hour (kph) or less, pyroclastic flows of superheated volcanic ash, rock and steam tend to carve a path down the flanks of steep-sided mountains at rates of more than 100 kph.

Such flows also tend to naturally follow the paths of least resistance, which on Mount Fuji would be the roads that also serve as emergency evacuation routes.

The Fujinomiya city government regularly updates information and advice for residents to follow in the event of an eruption, a city official told DW, adding that the findings of the new report will be incorporated into the next advisory. The city's web page marks areas that are considered most at risk, and those that will be affected by lava flow, along with possible evacuation routes.

The new report also indicates that a major eruption could release enough lava to sever the main road and rail links that hug the southern coast of the mountain, and block access to the land connection between Tokyo and western parts of Japan.

Fears of a sudden eruption

Mount Fuji last erupted in 1707, and vulcanologists say there are no signs at present of an impending problem on the mountain, although the peak is still classified as active. And Japan does not have to look too far back to find examples of volcanoes that suddenly returned to activity.

Mount Io, on the border of Miyazaki and Kagoshima prefectures in southern Japan, erupted in May 2018 after being dormant since 1768. The volcano released ash that soared more than 500 meters into the sky, and local authorities ordered people to stay away.

In September 2014, hundreds of hikers enjoying a day out on Mount Ontake, about 100 kilometers northeast of Nagoya, were caught completely unprepared when it erupted. Sixty-three people were killed.

Other experts, however, have long cautioned that a major eruption is overdue. Masaki Kimura, a retired volcano expert at Ryukyu University, warned that pressure building in the magma chamber beneath the volcano, as far back as 2013, has reached levels higher than those that were in place shortly before the 1707 eruption.

Professor Kimura estimates that an eruption should have already taken place in 2011, with a margin of error of four years.

The new hazard assessment was released less than a year after the national government released a report, warning that an eruption of Mount Fuji could release 490 million cubic meters of ash into the atmosphere.

Depending on the direction of the wind, ash could accumulate to a depth of 30 centimeters across vast areas of eastern Japan, which could cause wooden homes to collapse, block rail lines and roads, close airports, clog and damage machinery and destroy crops. It would also damage infrastructure, causing extensive power outages and cut access to water supplies.

Professor Shigeo Aramaki, a retired volcano expert with the University of Tokyo, who advises the government on disaster mitigation steps, believes that local governments are being overly alarmist.

"I do not understand why the estimate of the lava flow has doubled in this latest report, although all experts agree that it is very difficult to determine the amount of lava that will be released or the direction that it will flow in," Aramaki told DW.

"But this is not a densely populated part of the country. The lava will spread out over the land and probably won't cause too much damage. In any case, there are no current indications that an eruption is imminent or even likely, so perhaps the biggest thing to be concerned about is media reports creating worry among local people."