Prime Minister Yoshihide Suga spoke of the damage inflicted on Japan, but did not offer an apology for his country's militarism. His ministers courted controversy by visiting a war shrine for the war dead. 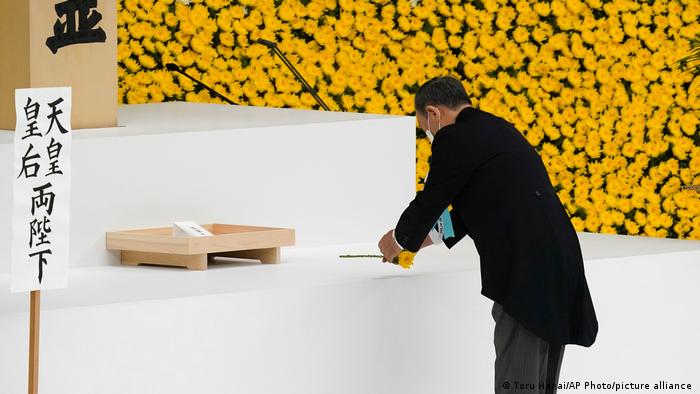 Japanese Prime Minister Yoshihide Suga on Sunday marked the 76th anniversary of Japan's surrender at the end of the Second World War with a memorial service in Tokyo.

"I will never forget that the peace and prosperity we enjoy today is built on the precious lives and hardships of the war dead," said Suga in a tweet.

In his speech later Sunday, Suga said, "We will commit to our pledge to never repeat the tragedy of the war." Like his predecessor Abe, Suga did not issue an apology to victims of Japanese aggression during the first half of the twentieth century. Abe has been previously accused of trying to present a whitewashed image of Japanese militarism.

Suga spoke about the damage suffered by Japan during World War II, including atomic bomb attacks by the US on Hiroshima and Nagasaki, the firebombing of Tokyo and other cities and the fierce battle of Okinawa.

In contrast, Japanese Emperor Naruhito expressed "deep remorse" over his nation's wartime past.

In 2013, Abe had stopped acknowledging or apologizing for the country's military past, putting an end to a nearly 20-year-old tradition.

The ministers' visit to the Yakusuni shrine sparked criticism from China and South Korea, who were subject to Japanese aggression during the war.

The shrine pays homage to the Japanese who lost their lives during the war, including World War II leaders convicted as war criminals.

Authorities issued fresh alerts in Hiroshima and Kyushu with more heavy rain forecast over the next few days. The downpour has already triggered a mudslide near Nagasaki.