Japan fears larger earthquake after Osaka tremor | Asia| An in-depth look at news from across the continent | DW | 20.06.2018

Seven years after almost 20,000 people died in an earthquake and tsunami that devastated northeast Japan, experts fear that Monday's tremor could be the harbinger of the much-feared rupture of Nankai Trough. 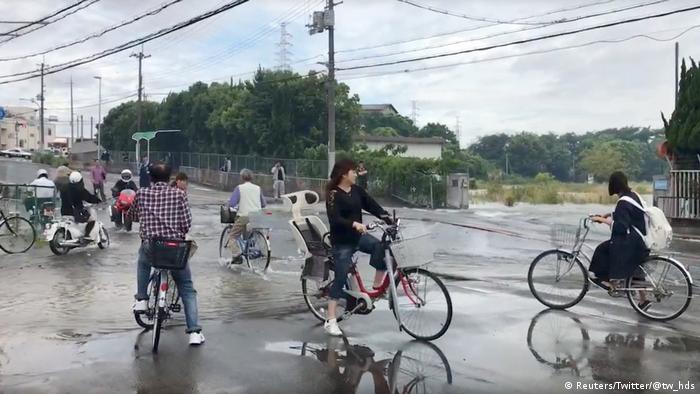 When the earthquake struck Osaka on Monday, Jamie El-Banna was in his apartment in Namba district. British-born El-Banna has lived in Japan for more than a decade and has felt numerous tremors in that time, but he admits this one was alarming.

"It was a proper shake. I have experienced a lot over the years," he told DW.

The 6.1-magnitude quake — the largest within the prefecture since records were first started in 1923 — was a mere 13 kilometers below the surface in the northern part of Osaka Prefecture. Four people were killed as a result of the quake, including a 9-year-old girl who died when a brick wall collapsed on her, while the shocks were strong enough to be felt in Tokyo, more than 500 kilometers to the east.

The Japan Meteorological Agency swiftly reassured the public that as the quake had occurred inland, there was no likelihood of a tsunami such as the one that devastated large parts of northeast Japan in March 2011 after a major tremor, although they did warn of potentially serious aftershocks over the coming weeks and even months.

According to the agency's statistics, no fewer than 31 aftershocks with a magnitude of between one and four were recorded in Osaka on Tuesday. And perhaps with memories of the Tohoku tragedy fresh in their minds, many residents scrambled to buy basic necessities in case the tremor was not the main shock but a precursor to a major earthquake.

"There was a lot of panic buying in supermarkets around the city, but particularly in areas that were close to the epicenter," said El-Banna, who set up the NGO It's Not Just Mud in the aftermath of the Tohoku disaster and spent a year helping local people rebuild their homes, schools, communities and lives.

"In Osaka, pretty much everything is back to normal already. Gas and electricity supplies are back on and the trains are running as they usually do," he said. But there are many, he admits, who fear that something more serious is about to hit.

"If a quake on the scale of Tohoku hits, it would be a far bigger tragedy because this is a far more built-up and densely populated region, while the economic impact would be felt for years," said El-Banna.

In December, the Japanese government revised its estimation of a major earthquake in Nankai Trough — which runs parallel to the coastline of southern Japan directly off Osaka — from 70 percent to between 70 and 80 percent in the next 30 years. It is this fault line that is considered to be the biggest threat to Japan and its people.

Studies suggest that large bouts of seismic activity within the trough occur at intervals of between 100 and 150 years. The most recent tremor was in 1946, when nearly 1,400 people died in a magnitude 8.1 earthquake. In 1854, more than 3,000 people died in a tremor that measured 8.4 in magnitude.

Since then, however, Osaka has grown into a vast, sprawling metropolis that is home to millions and any quake of a similar scale, particularly one that triggers a tsunami, is going to cause vastly more damage and loss of life. A study by the Cabinet Office's Disaster Management Bureau estimated that 17,800 people would die as a result of a major earthquake, while the economic impact could reach as high as Y57 trillion ($515 billion, €445 billion).

Read more: Earthquakes in Japan and Ecuador - what was behind the double dose of natural force?

'No way to predict'

"The problem is that there is no way to predict this kind of seismic activity because of its randomness," said Yoshiaki Hisada, a professor specializing in earthquakes at Kogakuin University.

"But it is indeed possible that Monday's quake was a precursor to something much larger in the coming days, and the only advice that can be given is that people should be prepared and take precautions," he told DW.

Tomoaki Osaki, senior coordinator for seismological information at the Meteorological Agency, points out that the June 18 quake was in the earth's crust rather on the border of tectonic plates, which reduces the likelihood of an even larger tremor in the coming days and weeks. But he admits that there are concerns over Nankai Trough.

"It is difficult to tell if there is a connection between this quake and activity in Nankai Trough, but the latest estimate is that there is a 70 to 80 percent chance of an event occurring within the next 30 years," he said.