Japan elevates nuclear accident level to same rating as Chernobyl | World| Breaking news and perspectives from around the globe | DW | 12.04.2011

Japan has raised the accident level at the Fukushima nuclear power plant from five to seven - the worst level on an international scale, on a par with the Chernobyl disaster. 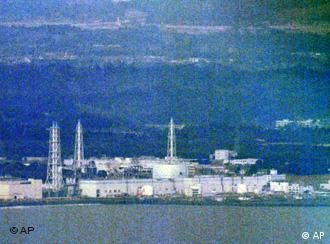 The change was announced on national television

Japanese authorities on Tuesday raised the severity level of the nuclear accident at the Fukushima plant from five to seven - the worst level on an international scale.

The amount of radiation leaking from the plant is about 10 percent of that in the Chernobyl accident, an unnamed official from the country's Nuclear Safety Commission said on Japanese national television.

An upgrade to level seven puts the Japanese leak on a par with the Chernobyl disaster in 1986.

"This is a preliminary assessment, and is subject to finalization by the International Atomic Energy Agency," said an official from the country's Nuclear and Industrial Safety Agency (NISA), which made the announcement jointly with the safety commission.

The power station has been releasing massive amounts of radioactive materials that pose a danger to human health, the Japanese public broadcaster NHK had reported earlier, citing NISA.

Reports of the heightened threat level emerged after Tokyo was rocked by a strong offshore quake - rated at a magnitude of 6.2 - off the coast from the capital on Tuesday morning.

The quake, which hit just 77 kilometers east of the city, caused buildings to sway and shut down subway and high-speed train services.

The operator of the crippled nuclear power plant announced on Tuesday morning that its workers had found, and rapidly extinguished a small fire near to a reactor building.

The Tokyo Electric Power Company said the fire was discovered at about 6.38 a.m. local time, but extinguished several minutes later.

Engineers have been pumping water into several reactors, after their cooling systems were knocked out by the giant quake and tsunami that struck Japan on March 11.

NISA declared the crisis at Fukushima a level five incident in mid-March, equivalent to the 1979 Three Mile Island disaster in the United States.

Fukushima to be a lesson for nuclear countries

The Fukushima nuclear disaster has ignited worldwide debate about the safety of nuclear energy. It has also provided a blueprint for how governments can improve safety regulations. (04.04.2011)

Workers at Japan's devastated Fukushima nuclear power complex are struggling to stop radioactive water leaking into the Pacific Ocean, as the government warned that the facility may leach contamination for months. (03.04.2011)

As accident rating is raised, Japanese have little trust in government (12.04.2011)