There were contrasting fortunes for two Bayern Munich stars in Kazan on Sunday. James Rodriguez was instrumental in a 3-0 win by Colombia that sent Robert Lewandowski and Poland out. 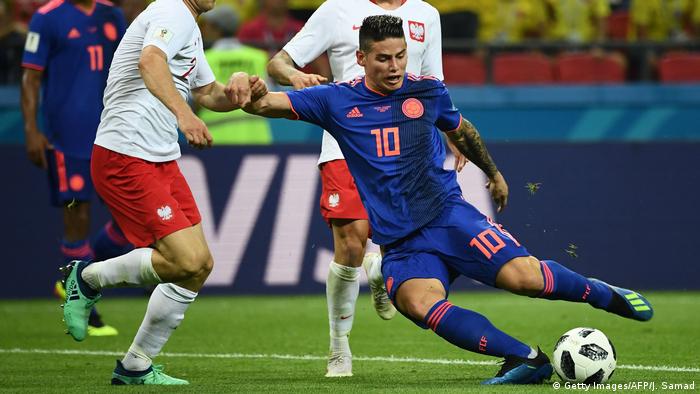 James Rodriguez was the provider-in-chief as Colombia kept their last 16 hopes alive with victory over Poland in Kazan.

The Bayern Munich forward set up two of his country's goals in a 3-0 win that saw Poland — and James' club teammate Robert Lewandowski — crash out.

In a tense first half, both teams struggled to create genuine chances, weighed down by the knowledge that defeat would see them knocked out.

Indeed, so tight was Group H at kickoff that a repeat of the draw between Japan and Senegal earlier in the day would have seen all four teams go into the final round of games with a chance of qualifying.

More than half an hour had passed before the first chance of the game fell to Colombia. Juan Cuadrado skipped past two Polish defenders, but Wojciech Szczesny was quickly off his line to smother the ball.

Five minutes before halftime, the breakthrough arrived. James, one year into his two-year loan deal in Munich, played a short corner to Cuadrado who, via Quintero, returned the ball to James. The 26-year-old chipped a perfectly weighted cross into the six-yard box where Yerry Mina rose above Szczesny to head Colombia deservedly into the lead.

If James was enjoying his return to Colombia's starting line-up after a calf problem limited him to a substitute appearance against Japan, his Bayern teammate Lewandowski was having another frustrating evening.

By halftime in Kazan, the 29-year-old had recorded fewer touches in the opposition box at this tournament than England's Harry Kane has scored goals. In other words, less than five.

Just before the hour mark, though, his chance arrived. Latching onto a long ball from Grzegorz Krychowiak, Lewandowski held off his marker and shot left-footed, but Colombian goalkeeper David Ospina closed the angle down and saved well — injuring himself in the process.

Lewandowski got his head to a throw-in from his former Borussia Dortmund teammate Lukasz Piszczek a few minutes later, but couldn't steer his effort on target.

Poland paid the price a few moments later, when Monaco striker Radamel Falcao latched onto Quintero's throughball to make it 2-0 with his first ever World Cup goal, before James provided his second outstanding assist of the match: Winning possession from a sloppy Poland throw-in, James advanced wide on the left, looked up, and swept a wonderful pass behind the Polish defense and into the path of Cuadrado, who made it three.

James has now been involved in ten of Colombia's last 14 World Cup goals (six goals and four assists), and will hope to further improve that record against Senegal on Thursday, where a win will guarantee progression to the last-16.

There was still time for Lewandowski to force an acrobatic save from Szczesny with a long-range effort, but for Poland, the journey is over. 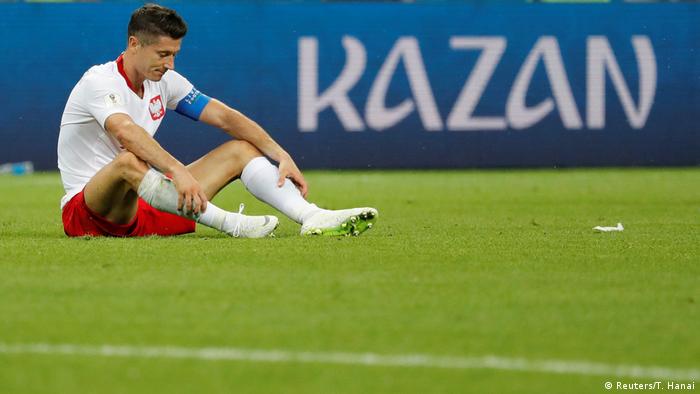 88' Poland close! Robert Lewandowski takes a powerful shot from outside the box. Ospina pulls a great save!

82' Colombia keeper David Ospina is carrying his leg after colliding with one of his own defenders. The Arsenal keeper is having trouble walking around, but as of now, he stays on the pitch. 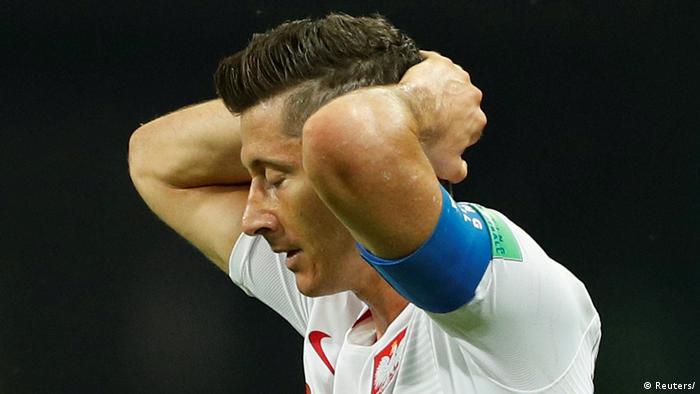 Robert Lewandowski's face says it all.

75' GOAL! Poland 0-3 Colombia — James Rodriguez cancels three Polish players with a perfect pass to Juan Cuadrado. The Juventus winger is left alone with his teammate Szczesny, and easily puts it past him. Game over.

70' GOAL! Poland 0-2 Colombia —  Juan Quintero find Radamel Falcao with a pinpoint pass, and the Monaco striker easily puts it past Szczesny! This game is Colombia's to lose...

67' Interesting attempt from Poland as Lukasz Piszczek takes a long throw in into the box. Lewandowski was very close to reaching the ball, but it's been cleared by the Colombia defense.

58' CLOSE POLAND! Grzegorz Krychowiak sends a long ball that leaves Robert Lewandowski alone in the box, but the Bayern Munich striker receives the ball a millisecond too late and only manages to shoot it into Ospina's body!

57' Poland make their first substitute of the game. Dawid Kownacki is off, Hull City's Kamil Grosicki replaces him.

51' Colombia's Quintero shoots from about 20 meters, his shot goes wide. A few moments later, a Colombia counter ends with a Falcao attempt from outside the box, but it's off the mark.

45' The second half starts!

HT Poland 0-1 Colombia — Mina's header divides the sides at the break, and Colombia are good value for their lead.

45' Four additional minutes. There have been a few stoppages.

43' That's no less than Colombia deserve for their first half display. They've been hungrier and classier than their opponents. Poland are heading out of this World Cup and need to re-think their approach at the break.

40' GOAL! Poland 0-1 Colombia — Mina heads in for Colombia! A delightful cross by James Rodriguez is glanced in by Barcelona defender Mina and Colombia have a deserved lead!

39' Cuadrado proving to be Colombia's most dangerous player as he forces another corner.

36' Cuadrado dances through the Polish defence, who are petrified of bringning him down for a penalty. Cuadrado gets to the byline but his cross is cut out for a corner. Colombia getting closer though.

32' Aguilar is cariied off and replaced by Uribe. 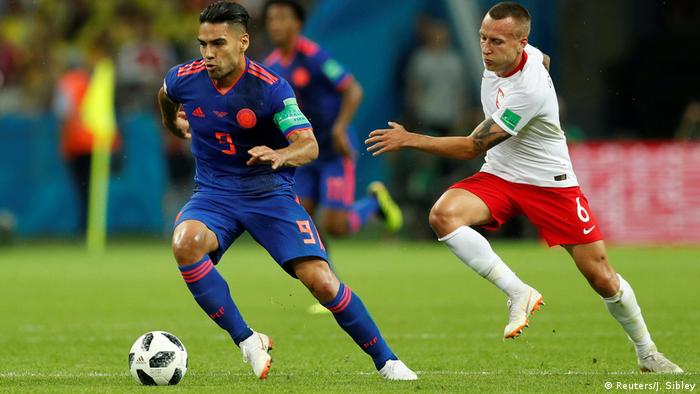 Colombia have been the more dangerous side going forward

31' Aguilar is down and it looks like he might not be getting up. A groin complaint seems to be the issue and the stretchers have been called for.

29' Some huge tackles going in. The latest is Pazdan on Rodriguez, who was taken clean out.

26' Colombia break, and the ball is worked from Rodriguez to Falcao, but with the Poland defence on the back foot, the final pass doesn't find Cuadrado. Wasted opportunity there.

24' Poland are finding it harder to keep the ball than their opponents at the moment.

21' A clever reverse pass by Juan Quintero almost finds Santiago Arias, but it's just too far ahead of the Colombian.

19' At the other end, Davison Sanchez deals with Robert Lewandowski somewhat unceremoniously. A swift barge in the back goes unnoticed by the officials.

18' Cuadrado’s cross is cleared, but it's Colombian making the running at the moment.

16' Colombia almost get the ball through to James Rodriguez in front of goal, but the ball is taken off his toes just as he was shaping up to volley. 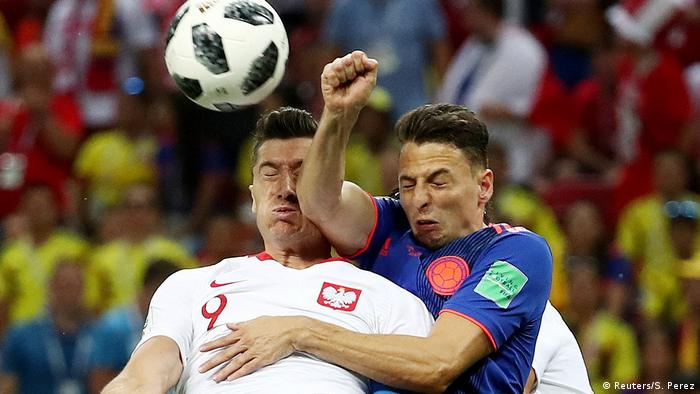 Colombia's technique for dealing with Lewandowski is to foul him.

13' But we're still waiting for our first clear cut chance of the game. Lots of running, not all that much in the way of quality.

10' The opening minutes have been utterly absorbing. The game is being played at a very high intensity.

7' Lewandowski steps on Mina's hand — that's got to hurt. The trainer is on to treat Mina.

4' Lewandowski gets his head on a cross from the right but it's a bit too high for the Bayern Munich striker and the ball pops up for Ospina, who catches it easily.

2' Poland are enjoying the best of the early exchanges, winning two early corners and pinning Colombia back.

1' KICK OFF! We're underway in Kazan.

09:55 — The anthems are sung and the coin has been tossed, which means we're almost ready to go...

19:45 — Welcome to live coverage of Poland vs. Colombia. It's a big one for both sides in a group that remains wide open.