Shiite leader Ibrahim Zakzaky and his wife have been in jail since 2015. On Wednesday, a Nigerian court acquitted the couple and ordered their release. 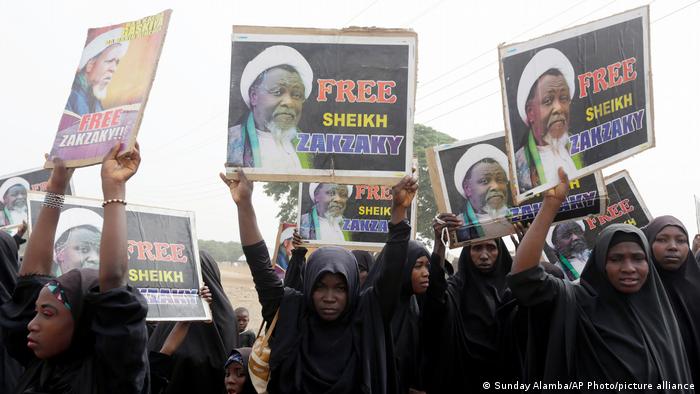 A Nigerian court on Wednesday acquitted and ordered the release of Shiite Muslim cleric Ibrahim Zakzaky and his wife Zeenah Ibrahim.

The two have been in jail since 2015, facing eight charges brought by the Kaduna state government in 2018, including aiding and abetting homicide, unlawful assembly and disruption of public peace.

"The court has discharged and acquitted Sheikh Ibrahim Zakzaky and his wife of all the charges filed against them. They have regained their freedom today," said Sadau Garba, a lawyer for the couple.

Who is Ibrahim Zakzaky and why was he jailed?

Zakzaky, who has called for an Iranian-style Islamic revolution in the country, was initially arrested alongside his wife and some 200 followers from his Islamic Movement of Nigeria (IMN) in a violent government crackdown in the northern Nigerian city of Zaria, in December 2015.

When a court ordered the couple released in 2016, the government simply ignored the ruling and filed murder charges against them.

The charge stemmed from the 2015 crackdown in which an estimated 350 people were killed by government forces at an IMN compound and a nearby mosque and burial ground in northern Kaduna state over the course of two days of clashes.

The crackdown was sparked when IMN members blocked an army command convoy during a religious procession. At first, the army denied the events, then claimed that a soldier had been killed by armed Shiites.

Most IMN members jailed in 2015, were released in the course of 2019 and 2020. The continued detention of Zakaky and his wife, however, sparked protests that turned deadly, leading the government of Nigeria to outlaw the IMN 2019.

Wednesday's court decision was "a victory for truth and justice against tyranny and impunity," according to IMN spokesman Ibrahim Musa.

"This judgement has not only vindicated them and all members of the Islamic movement in Nigeria, but it is certainly a victory for perseverance in the face of extreme persecution by the Nigerian government," said Musa.

Defense lawyers say the couple will, "seek damages against the Kaduna state government for all the deprivations and the travails our client[s] suffered."

Dari Bayero, the state's lead prosecutor, confirmed that the pair had been freed but said, "we are certainly going to file charges against the duo at appeal."