A court in Austria has jailed members of a far-right group that tried to initiate an army-led overthrow. The 42-year-old woman at the helm received a 14-year sentence on charges including inciting high treason. 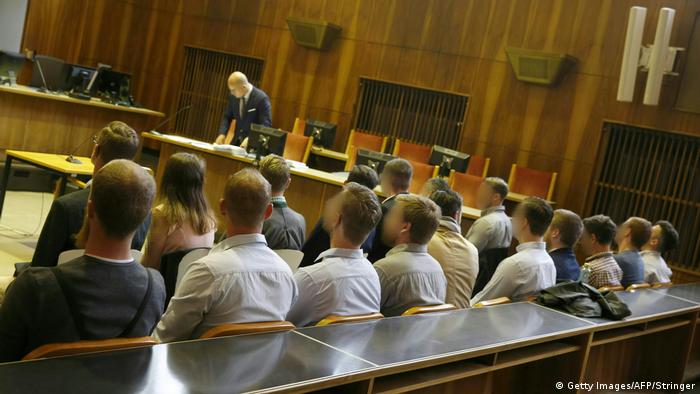 Szene from the trial in July 2018 in Graz, Austria

The Austrian regional court in Graz, capital of the state of Styria, on Friday jailed the self-appointed president of the "Federation of States" ["Staatenbund"] for 14 years, saying the heavy penalty was a "clear signal that anti-state activities will not be tolerated."

The woman, identified in media reports as Monika Unger, was also convicted of subversion over her bid since 2015 to lead the group said by Austria's domestic intelligence service to number 2,700 members.

Her deputy, a 71-year-old former police officer, was jailed for 10 years, while the other 12 accused, among them pensioners and unemployed persons, were sentenced to jail terms of between nine months and three years.

They had been arrested in April 2017 in sweeps by 450 special force police officers.

At Friday's sentencing, Unger said she would take the case to appeal.

During the trial in Graz, prosecutors said the "Staatenbund" had tried to "order" the Austrian army to overthrow the government as well as asking Russian President Vladimir Putin for military assistance.

To finance its activities, the group had proffered fantasy documents, including car number plates, business trading licenses, property registry entries and "diplomatic passports," and tried to dissuade members from paying taxes to the Austrian state.

Akin to 'Reichsbürger' in Germany

The group's denial of established constitutional democratic order is akin to "sovereign citizen" or "rejectionist" movements such as the "Citizens of the Reich" ["Reichsbürger"] in Germany – a cluster of anarchists, racist neo-Nazis and esoteric adherents. Defense lawyers for the 14 had argued that the group's vision was "utter nonsense, but not dangerous."

Friday's verdicts in Graz followed widespread outrage over televised remarks made Tuesday by Herbert Kickl, Austria's far-right interior minister, who asserted "it was up to law to follow politics" and questioned Europe's human rights convention in relation to asylum seekers.

The opposition Social Democrats (SPÖ) in a statement on Wednesday said that Kickl had "launched a grave attack on the rule of law in Austria."

A passionate story about piano teacher Erika Kohut, who is emotionally and sexually stunted under her domineering mother and seeks salvation in a sadomasochistic relationship — in vain. (08.10.2018)