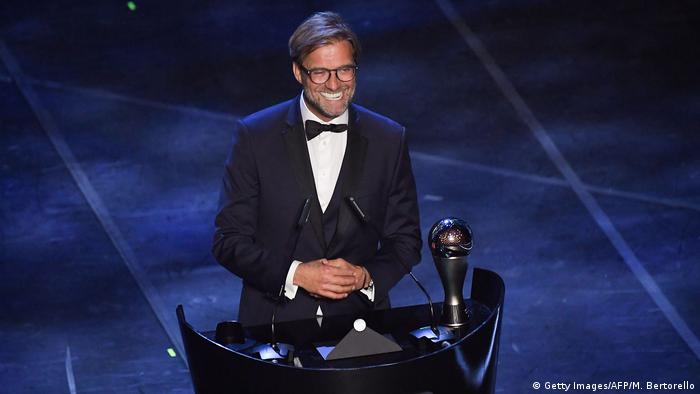 Germany's Jürgen Klopp has been named men's coach of the year at FIFA's 'The Best' awards ceremony at the Teatro alla Scala in Milan, Italy, capping off a sensational year at the helm of UEFA Champions League winners Liverpool.

"It is great, nobody expected this 20, 10, five, four years ago that I would be standing here," said the 52-year-old, who joined the Reds in 2015. "I have to say thank you to my outstanding club Liverpool FC. As a coach you can only be as good as your team. I'm really proud of being coach of such an incredible bunch of players."

The award is the latest landmark in a unique rise to the pinnacle of his profession for one of Germany's greatest exports, who began his coaching career without the neccessary coaching badges when he took over as interim head coach at Mainz in 2001. His cheeky demeanour, undiluted passion and raw emotions have endeared him to every fan base he's come in contact with on the way to the top — even those sporting different colors.

A double winner with Borussia Dortmund in 2012, Klopp had to endure his fair share of heartbreak — six finals, two clubs and eight years without a trophy to be exact — before being crowned European champions with Liverpool at the end of last season. His post-match rendition of 'Let's Talk About Six, Baby' in reference to the Merseyside club's Champions League titles will live long in the memory, but on this occasion Klopp used his platform to announce his decision to join the .Common Goal initiative

"While it is flattering to receive an individual award today, in football and in life, nothing is possible without teamwork," said Klopp. "That is why I would like to celebrate this occasion by sharing that I am joining Common Goal and pledging 1% of my earnings to help change the world through football.

"Since Common Goal started two years ago, the movement has grown steadily proving it is a simple, effective and safe mechanism for players and managers to give back through football. As a team, even with a minimum pledge of just 1%, together the football industry is capable of transforming the world. Now is the time for those interested to take a step forward."

Klopp was up against Manchester City's Pep Guardiola and Tottenham's Mauricio Pochettino as he became the third German coach to win the prize, which has been awarded since 2010. Former Bayern Munich boss Jupp Heynckes and German national team head coach Joachim Löw picked up the honor in 2013 and 2014 respectively.

Meanwhile, Barcelona's Lionel Messi saw off stiff competition to win the best player of the year award for a record sixth time.

The Argentine managed to claim the prize, which was formerly known as the Ballon d'Or, despite not reaching the Champions League final. Archrival and five-time winner Cristiano Ronaldo came third.

Messi's win at the gala event came in a season where he did win the Spanish league title, as well as the European golden boot. "I want to thank those who gave this prize to me," he said, "even though individual awards are a secondary thing to me. It is a unique moment and it is good to celebrate it with my family and my children." 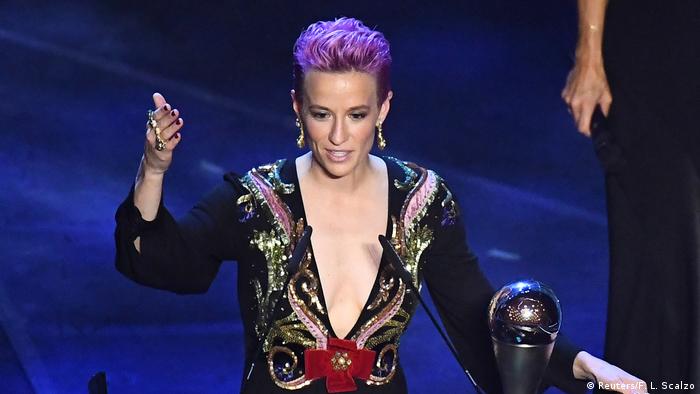 US co-captain Megan Rapinoe won the women's version after leading her country to World Cup glory in July.

The 34-year-old won the Golden Boot in France, as well as the Golden Ball for being the tournament's standout player .

Lionel Messi will miss four international friendlies after a lengthy ban from CONMEBOL. The Argentine captain accused the South American soccer governing body of "corruption" during this year's Copa America. (03.08.2019)

German exports to the Premier League

While the wait for the Bundesliga continues, the Premier League begins this weekend, with up to nine Germans potentially involved in the opener. New faces and big names, here are Germany's Premier League representatives. (09.08.2019)

The soccer star is self-isolating after a positive coronavirus test. His fellow PSG players Juan Bernat, Sergio Rico and Nathan Bitumazala have also tested positive for the virus.

French motorcyclist Pierre Cherpin has died as a result of injuries sustained in the Dakar Rally. Meanwhile, Women's World Cup-winner Megan Rapinoe has said the US Capitol siege was about "holding up white supremacy."

Less than a month before Cameroon is set to host the Africa Cup of Nations, newly-elected football federation president Samuel Eto'o is under pressure. Ensuring both player and fan safety is the top priority.