Ivory Coast sweetens up with first locally made chocolate

Ivory Coast is the world’s biggest cocoa producer but for a long time it couldn’t process the cocoa beans into chocolate. But that, as they say, is history, while "Made in Ivory Coast" is the future. 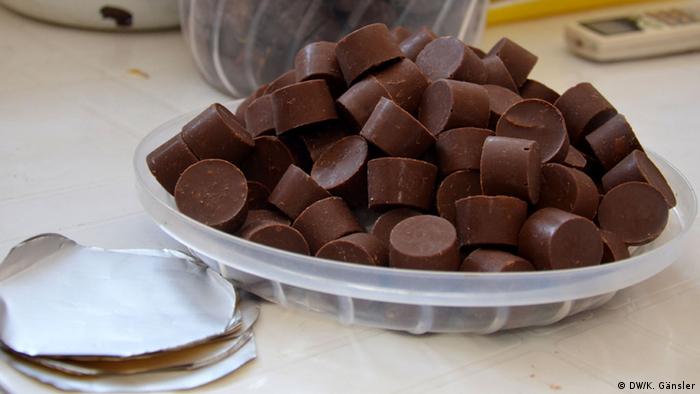 Whenever Yao Cesar Victoria N'Guessan leads guests through his small plantation, his face lights up with pride. His fields lie around 30 minutes from the provincial capital of Gagnoa in the southern part of Ivory Coast. On five hectares of his land, he grows cocoa plants.

This is in keeping with his family's tradition. "Even our grandparents grew cocoa," says the 38-year-old. Like so many other Ivorians, he was brought up knowing about cocoa, but very little about chocolate. "They [chocolates] were indeed in Ivory Coast but we did not know about them."

The West African nation with its 23 million inhabitants is the world's largest cocoa producer. According to the 2015 Cocoa Barometer published by several non-governmental organizations, Ivory Coast produces more than 1.7 million tones of cocoa annually. Ghana is second with 897,000 tones.

Nevertheless, for many Ivorians such as farmer N'Guessan, chocolate, the end product of cocoa has long been a luxury. Europe and the US are the main big producers and consumers of chocolate.

From the cocoa tree to the supermarket

But that is changing now. Though there are still no reliable figures to support this, more and more supermarkets in the economic capital Abidjan are increasingly selling chocolate under the trademark "Made in Ivory Coast". Cafes are also offering homemade chocolates. 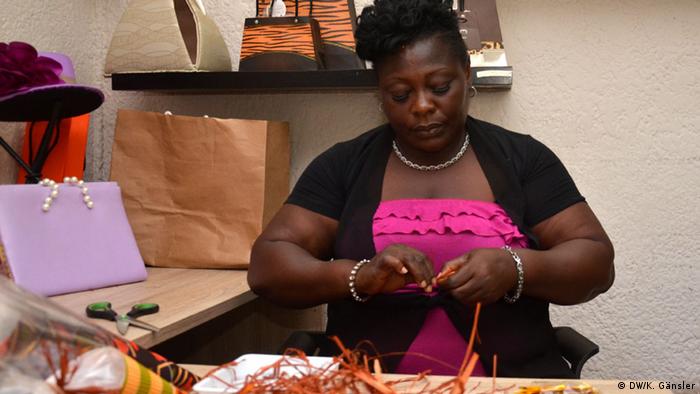 Currently chocolate produced by this small company is delivered on order

In Cocody, a neighborhood in the heart of Abidjan, Amoin Odette Kouassi has crafted small boxes and bags in different colors made from thin cardboard. She then wraps them with ribbon. "These are for the labels" she says, pointing to small pendants in gold. "In Baule we usually say: The eyes too have needs." She laughs at the proverb, which loosely translates to something like, "we eat with our eyes too."

When she is finished with a box, she carefully places two chocolates insides. The sweet delicacies are special because they have been completely locally produced.

The small gift boxes are still not available in supermarkets. The ten employees including Amoin Odette Kouassi who are currently working for Instant Chocolat, a small enterprise, produce the chocolates on order. Customers include airlines or wealthy individuals. Some companies offer chocolates during fairs and thus make advertising for chocolate made in Ivory Coast.

From banker to chocolatier

Axel Emmanuel is the owner of the small chocolate company. He wants to make his products known throughout the West Africa region. Emmanuel worked as a full-time banker until 2010 when he decided to try his hands in the chocolate industry.

"If Ivory Coast is the largest cocoa producer, at least one Ivorian must be at the end of this process," Emmanuel said. He is not the first chocolatier in Ivory Coast. "But the others have always produced only French chocolate," Emmanuel added. After his training, he received numerous awards, not just for his chocolates but also for his entrepreneurial spirit.

Emmanuel's chocolate factory is a small workshop with air condition humming in the background. Inside he has a little mill which he procured from India. Nearby is a granite counter where the cocoa is processed. Good chocolate can only be processed on cold surfaces and according to Emmanuel, the granite counter is a good base.

Chocolate for the middle class

The chocolatier says even though chocolate is a sensitive product, Ivory Coast can produce it well. There are already several factories and the government wants to promote chocolate production. "The government has said the time of conversion has come," says Emmanuel. This means the Ivorians should not only grow the cocoa, harvest and export it, but also process it directly in the country. 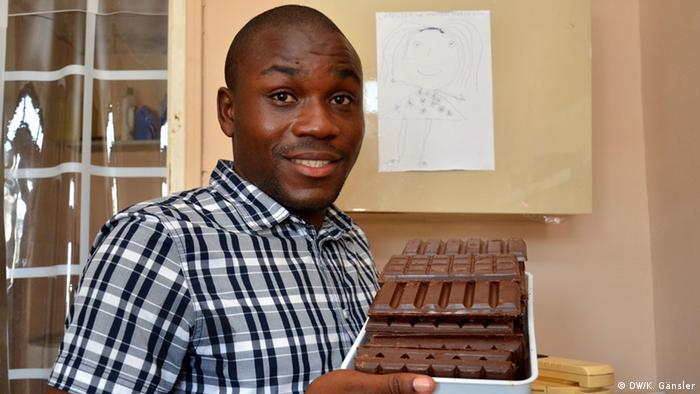 The hope is that this will in turn create new jobs and boost consumption. Ivory Coast is aiming to process 50 percent of its own cocoa to cocoa powder, butter or chocolate by 2020.

Ivory Coast's economy has been growing by nine percent each year. In Abidjan, there are numerous cafes that are well frequented and have now become popular meeting places for lunch breaks and weekends. "In the past, no one could afford chocolate because it was a luxury product. Now it is possible to buy it," says entrepreneur Emmanuel.

And far away from the capital, in Gagnoa, farmer Yao Cesar Victoria N'Guessan recalls on his very first bar of chocolate. "It was very exquisite," That experience is however very different for his three children. "Today, when I go with my youngest child to Gagnoa, there is always chocolate," N'Guessan says and laughs.

Cashew nuts are big business in Ivory Coast, which is now the world's biggest cashew exporter. Cashews are also the source of a lactose-free milk substitute popular in Europe and the US. (14.01.2016)

The region's chocolate consumption is growing at a rapid pace, offering the mature industry an attractive and relatively untapped market. But how is this impacting global supplies and trends, and is it sustainable? (01.12.2014)

Some chocolate leaves a bitter aftertaste

Germans love chocolate. But the labor and living conditions of cocoa planters are bad, and child labor is common. The German initiative "Forum Sustainable Cocoa" wants to change that. (08.04.2012)