Originally part of the Athens temple, the marble sculptures on display in the British Museum are at the center of a 200-year-old restitution dispute between Greece and the United Kingdom. 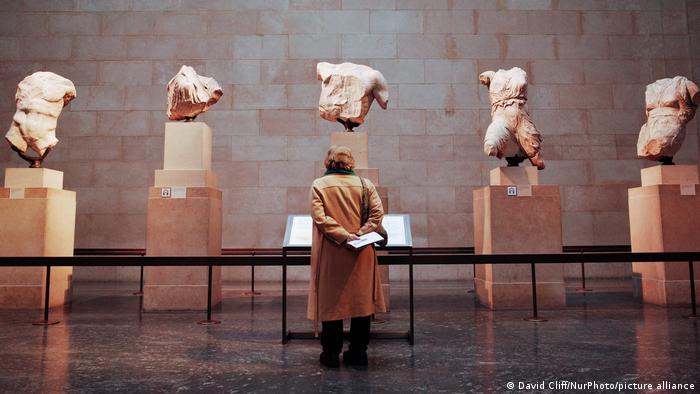 At the top of his agenda was a Greek demand that's been made for centuries. He asked that the so-called Parthenon Marbles — a series of sculptures that were once part of the Parthenon — be taken from the British Museum, where they are currently displayed, and returned to Greece once and for all.

The 2,500-year-old sculptures, which depict scenes from Greek mythology, are sometimes referred to as the Elgin Marbles, after Lord Elgin, the British ambassador to the Ottoman Empire in Constantinople. His staff began removing them from the Acropolis in 1801 and sold them to the British government, along with hundreds of other antique items taken from Athens.

The marble sculptures consist of parts of a frieze, metopes and figures. They represent roughly half of the surviving sculptural decorations of the Parthenon — many of their counterparts are in Athens' Acropolis Museum. 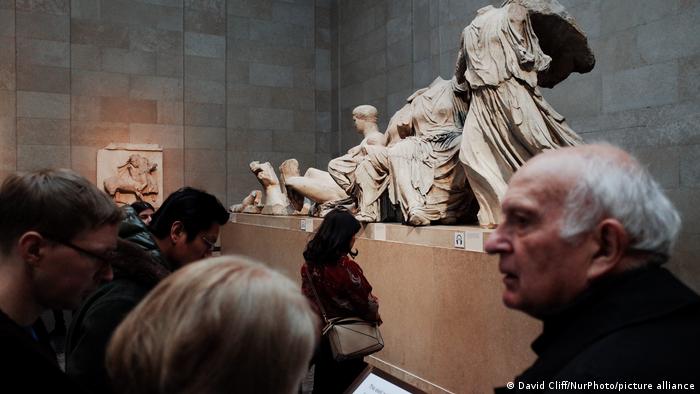 Their sale to the British Museum just barely passed via an Act of Parliament in 1816 and was already vehemently opposed by some, including poet and author Lord Byron, who called it a "robbery."

Greece has long maintained the items were stolen, while the British Museum claims they were acquired legally and should remain in the UK.

A lengthy statement on the British Museum's website on behalf of museum trustees points out that the sculptures were transported by Lord Elgin who "acted with the full knowledge and permission of legal authorities of the day in both Athens and London." 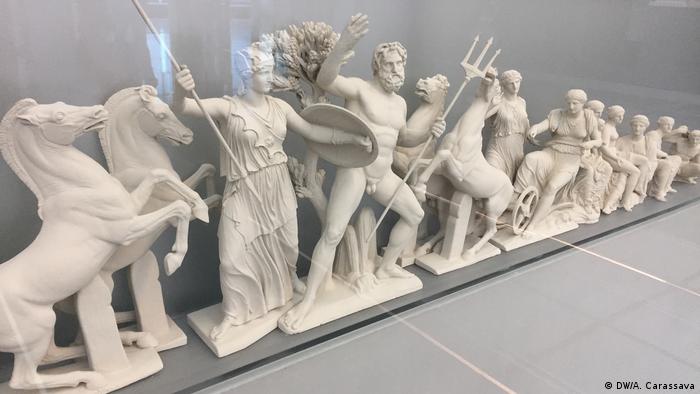 Replicas of one of the friezes in the Athens Acropolis Museum

When a museum in Sicily, Italy returned a 2,500-year-old Parthenon marble fragment to Athens, it sparked further calls for the British Museum to open talks about the restitution of its marble sculptures.

On January 10, Athens' Acropolis Museum presented the "Fagan fragment," the foot of the ancient Greek goddess Artemis that was returned from the Antonio Salinas Archaeological Museum in Palermo.

Described by the Greek culture ministry as "a deposit, not a loan" that would remain in Athens for the next eight years, the Greek Prime Minister Mitsotakis used the occasion to weigh in on the extensive Parthenon collection still held in the UK.

"I think it paves the way also for the British Museum to enter into serious discussions with the Greek authorities, to find a solution that will be mutually acceptable," Mitsotakis said at the Acropolis Museum, where the Parthenon sculptures are housed.

As reported by AFP, Mitsotakis cited opinion polls in the UK that favor restitution, saying that "when there is a will, there is a way ... sooner or later it will happen."

Whether or not the marble sculptures were legally acquired by the UK remains at the core of the restitution debate, says Alexander Herman, assistant director of the Institute of Art and Law and author of the 2021 book "Restitution: The Return of Cultural Artefacts" for the series "Hot Topics in the Art World."

"For over 200 years, this has been on the cultural agenda in the UK and obviously in Greece," Herman told DW.

Greece was occupied by Turkey at the time Lord Elgin removed the sculptures, but shortly after Greece gained independence from the Ottoman Empire in 1832, requests came in for various artifacts to be returned, Herman points out.

As a neutral observer, Herman has closely studied both sides of the debate over the Parthenon sculptures. 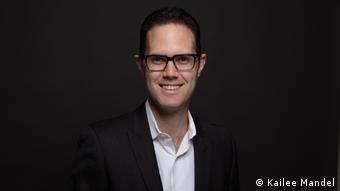 But a broader restitution debate has taken off in recent years.

Museums around the world, from the US to Germany, have been returning items acquired under murky circumstances, often from former colonial strongholds.

In November, France returned 26 artworks to Benin which were taken from the former Kingdom of Dahomey.

Meanwhile, debates have raged around Berlin's Benin Bronzes, the centerpieces in the newly opened ethnological museum in the Humboldt Forum, which will be returned to Nigeria beginning in 2022.

In November, the German Lost Art Foundation brought together 40 experts from around the world to discuss looted art and the restitution of colonial objects.

There appears to be an increased awareness of the topic in public dialogue, putting the spotlight even more on the longstanding debate between Greece and the UK.

Calls from the UK to return the sculptures

The meeting between the two world leaders in November did not go as Greece's Prime Minister had hoped. Boris Johnson claimed to have nothing to do with it, saying that while he "understood the strength of feeling of the Greek people," the matter was one for the British Museum, and not for the UK government. 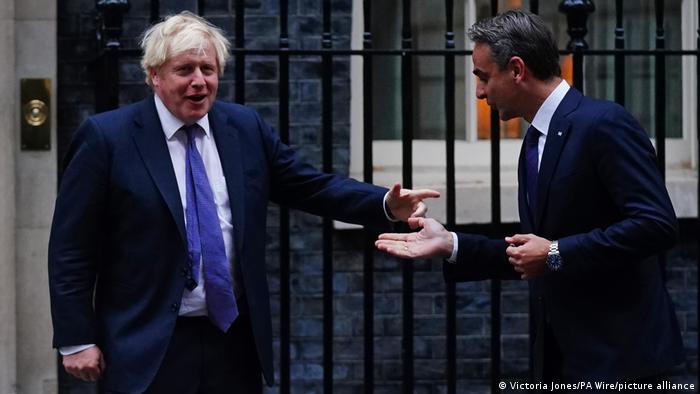 Calls have grown for the marbles to be returned.

The topic was taken up in October by a UNESCO advisory committee, which recommended that the British Museum open a dialogue with Greece related to their return.

Apparently, many in the UK also want the statues to go back to Greece: A YouGov poll released in November reported 56% of respondents in the UK being in favor of repatriating the sculptures.

Other voices in the UK have also weighed in. Writer and activist Stephen Fry, who has authored a number of books retelling Greek mythology, has called for the statues to be returned to Greece, proposing the British Museum could use 3D technology to keep visitors connected to the works. 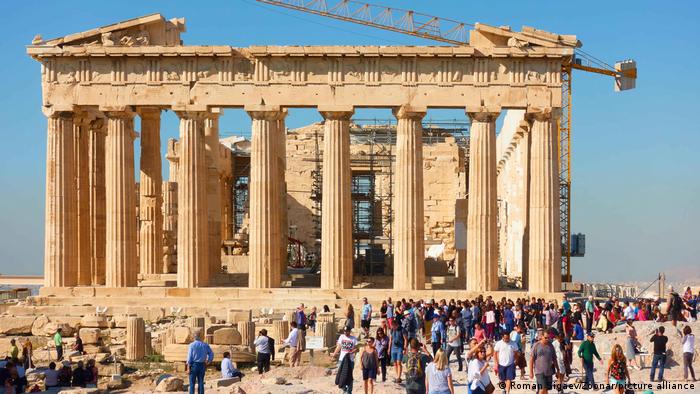 According to restitution scholar Herman, both parties have become too entrenched in their arguments to easily find a way out of the present gridlock. "The more each side tries to win the debate by proving beyond any doubt for example that the items were acquired legally in the case of the UK — or for the Greek side, that they were stolen and belong in their homeland — the more these arguments end up further entrenching the parties." Both sides need to be able to find a "middle ground negotiation or discussion" in order to find a resolution, says Herman.

Should a resolution ever occur, it would be significant, says the scholar: "It would be quite a special moment, I think, for Anglo-Greek relations, but also for Europe and the world to show that even the most intractable disputes can can be resolved."

This article was updated on January 11, following the return of Sicily's Parthenon fragment.