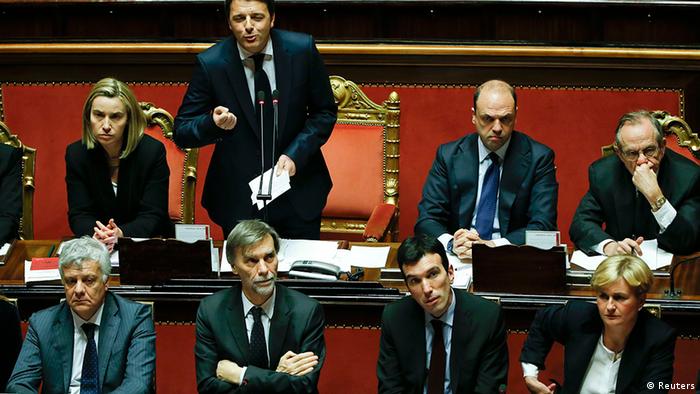 Backed by his center-left Democratic Party (PD), as well as the small center-right NCD and other centrists, Renzi (pictured standing) won the upper house's backing by 169 votes to 139.

The 39-year-old, who is the outgoing mayor of Florence, appeared in the Senate presenting himself as a straight talker and a man of the people. Promising to deliver Italy from its current financial woes, he told senators they were living in “a rusty country, paralyzed and enchained by an asphyxiating bureaucracy.”

Italy appears to be slowly emerging from its deepest recession in decades, but is still weighed down by the burden of a 2-trillion-euro ($2.75-trillion) public debt. Renzi, who has said Italy must get its finances in order because “it is our duty, for our children's sake,” said that the time for complaints about recent austerity measures had come to an end.

"Let's end the chorus of grievances," Renzi said. "The future of Italy does not lie in complaining from morning to evening."

Renzi, who is Italy's youngest ever prime minister, said a key priority was to tackle Italy's unemployment rate, which is above 12 percent, while youth unemployment stands at some 40 percent.

The Senate test represented a bigger hurdle for Renzi than a forthcoming vote of confidence in the lower house, where his coalition's numbers are greater. Although he won the Senate vote comfortably, there had been some doubts as members of Renzi's own party raised concerns over his political style.

Renzi took office last week and was sworn in on Saturday after taking the premiership from fellow center-left Democrat Enrico Letta, who he had criticized heavily. Some Democrats have claimed the manner of the takeover was “heavy handed.”