Italy told not to send back intercepted refugees | Europe | News and current affairs from around the continent | DW | 24.02.2012

Italy told not to send back intercepted refugees

The European Court for Human Rights has told Italy it did not have the right to send a group of refugees straight back to Africa. Experts are now calling for clear border patrol rules for the EU. 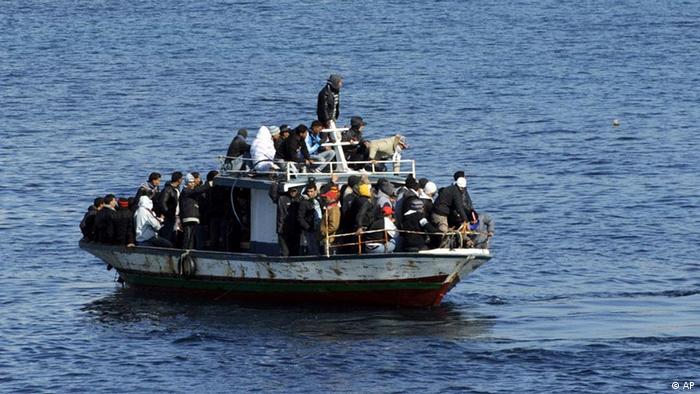 The case goes back three years: Approximately 200 men, women and children had ventured out onto the Mediterranean. In three boats, they were trying to go from Libya to Europe to escape the violence and misery in their home countries Somalia and Eritrea.

They believed their goal was in sight when ships of the Italian Guardia di Finanza on May 6, 2009 appeared on the horizon, just over 65 kilometers (40 miles) from the island of Lampedusa, the southernmost outpost of the European Union in the Mediterranean. The border guards took the Africans on board - but instead of bringing them to Italy, their course led directly back to Libya.

"In pictures you can clearly see that the refugees were forced off the ships in Tripoli," Anton Giulio Lana said. He is one of two lawyers representing 11 Somalis and 13 Eritreans before the European Court of Human Rights in Strasbourg. He alleges the Italians placed his clients at risk of torture and ill-treatment and that Italy also accepted that they would be returned from Libya to their home countries.

'Guantanamo on the high sea' 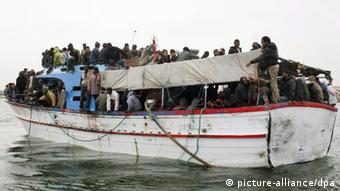 A perilous journey across the sea

The refugees were not advised by the Italian border police that they could apply for asylum directly on board, said their other lawyer, Andrea Saccucci, at the first hearing last June. Furthermore, there was no legal provision for it, he added. Rather, the Italian government had created a legal vacuum in which border controls were moved offshore and away from Italy's actual territory. "This court should prevent signatory states from building such a Guantánamo on the high seas," Saccucci said as the trial began on June 22.

In contrast, Italy's defense attorney Coppari Silvia argued that the appeal was inadmissible. Italy has upheld the guidelines of the European Union, aimed at preventing illegal immigration, she said, and the present complaints are absurd and biased.

"The government cannot accept the manner in which this complaint has been written," Coppari said. "This is clearly an ideological manifesto against Italy and its policies. From our perspective, this is not the place to debate this matter."

Breach of the European Convention on Human Rights

But the court saw differently and agreed with the refugees. The judges ruled unanimously that Italy had violated the European Convention on Human Rights (ECHR). The refugees had been placed at risk of inhumane treatment. And because neither their identity had been established, nor had each case been examined individually, the immediate deportation of the plaintiffs violated the prohibition of collective expulsion of foreigners, the court said.

The Strasbourg judges noted that even though Italy was faced with a high number of incoming refugees that was not a reason to deport them. They said such circumstances also did not give the country the right to deport people to countries where they face torture or ill-treatment.

The German Institute of Human Rights said the court's decision was the way forward. Hendrik Cremer is a lawyer at the institute in Berlin, which was founded eleven years ago as an independent association on the recommendation of the Bundestag.

"The judgment makes clear that Italy cannot ignore its human rights obligations," Cremer said in an interview with DW. This also applies to other states as they may not simply shift border control measures to the high seas, he added.

"The judgment makes it clear that it violates human rights to intercept refugees there and then to place them in danger of serious human rights abuses, in defiance of the European Convention on Human Rights," Cremer stressed.

The European Union must now make clear rules by which human rights are respected at the EU's external borders, Cremer said., pointing out that an unambiguous legal basis for the EU border agency Frontex now also had to be created.

"If it is not clearly and effectively guaranteed that the safeguards of the European Convention on Human Rights will be respected, Germany should also end all support for and participation in Frontex operations," Cremer said.

The world has become more dangerous place for illegal immigrants, according to data from the United Nations. The number of forcibly displaced persons increased to some 43 million people in 2010. (14.02.2012)

The OECD has warned Germany that its economy might fall back unless it speeds up reforms. A shortage of skilled labor, an ageing population and high social costs all need urgent fixes. (14.02.2012)