Michelangelo's David does not have an earthquake-proof pedestal. While he's still standing, numerous historical treasures in central Italy have been damaged or destroyed by the recent quake. 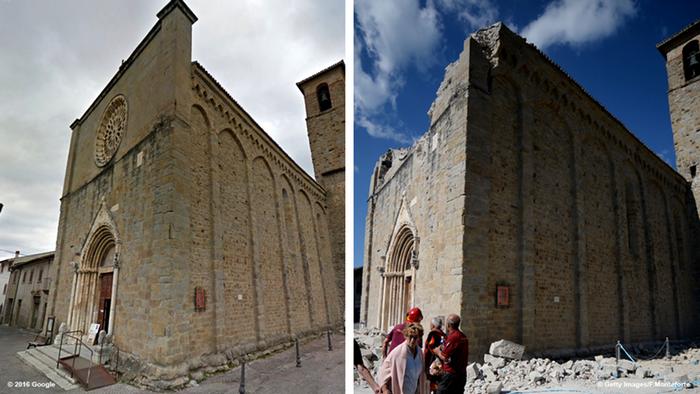 David, fashioned by Michelangelo in the early 16th century, still stands on his pedestal and draws countless tourists to the Galleria dell'Accademia in Florence. But for how much longer?

When, two years ago, a series of slight earthquakes shook the region surrounding Florence, experts sounded alarm. The precious Renaissance masterpieces in the city could easily come apart, they warned in a study.

Pre-existent cracks in the legs of statues could break even further apart. A replacement of the pedestals was deemed vital. Minister of Culture Franceschini promised 200,000 euros ($223,000) for the construction of an earthquake-proof pedestal for the statue of David back then.

Yet to this day, nothing has happened to that end.

'Secure pedestal will do little help to David' 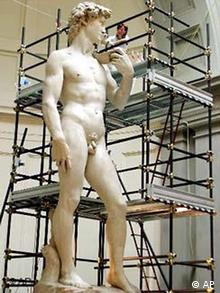 Is David in danger?

In the meantime, German art historian Cecilie Hollberg has taken the conservation of the famous naked young man into her own hands. For more than a year, she has been the head of the Galleria dell'Accademia, which features the world's largest collection of Venetian paintings spanning from the Gothic to Rococo.

Following the most recent earthquake in central Italy, talk of "Project David" has once again resurfaced. Despite the clear need for action the plans for restoration have grown stale and need to be reevaluated "with a cool head," Hollberg told DW.

"A secure pedestal will do little help to David if the entire building collapses!"

Shortly after the earthquake in Italy last week, art historians, architects and restorers all gathered in central Italy to assess the damage. Their evaluation sounded devastating. Around 290 significant buildings within a 20-kilometer (14-mile) radius from the earthquake's epicenter were reportedly broken or had collapsed, with 50 of them gravely damaged.

In Amatrice, the Basilica of St. Francis, a building from the 14th century featuring Baroque frescoes and valuable wall murals, was particularly affected by the quake. One particular fresco depicting Judgment Day was severely damaged.

The city museum in Amatrice, which contained valuable sacred art from the Middle Ages and early Renaissance period, was also widely destroyed. 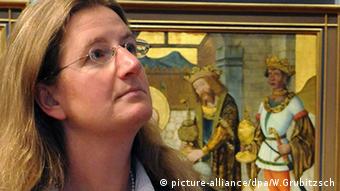 Buildings still on the verge of collapsing

In nearby Archata, the Church of the Holy Assumption, which dates back to the Middle Ages, is said to be on the verge of collapse following the quake. Inside is one of the most important sacred works of art in the region: a polychromatic wooden crucifix dating back to the 13th century.

Likewise, the Church of the Holy Cross in Pescara del Tronto, one of the oldest religious buildings in Italy dating back to the early 4th century, is also under threat of collapsing.

In Umbrian Castelluccio, the tower of the Roman Church may fall if it isn't secured. For safety reasons, the cathedral in Urbino had to be closed since deep cracks were discovered in exterior foundation walls.

It is impossible to give an estimate on the cost of the damage from the quake. With Italy's economy continuing to suffer, it seems even more difficult to find the funds to finance the mammoth task of restoring damaged cultural masterworks. Italy only gives one percent of its tax income to the arts, making the Ministry of Culture the poorest of all government departments.

Italy's Culture Minister Dario Franceschini has said he hopes that private donations will help alleviate the situation and has also appealed to the European Union and UNESCO for help. However, for the time being, all eyes remain on diverting funds to rebuilding the villages that were destroyed in the earthquake before arts and culture can even begin to be addressed. 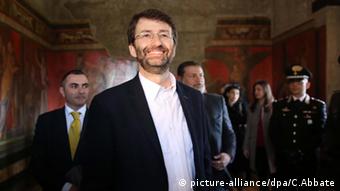 Italy's government-run museums have chipped in, donating all their revenue from last Sunday to earthquake aid. Tourist sites such as the Coliseum in Rome, the Uffizi Galleries in Florence, and the Pompeii archaeological site all joined forces in the effort to raise funds for survivors. Authorities in Rome said that the initiative managed to attract more than twice the number of regular Sunday visitors, raising more than 610,000 euros ($675,000).

More than twice as many visitors showed up at museums than normally do on a typical weekend at the end of August, according to news agency Ansa. Franceschini said that it was a "wonderful day of solidarity. We would like think everyone who took part."

Cecilie Hollberg estimated that 100,000 euros were raised in Florence alone. Hollberg stressed that the weekend's success story with the museum solidarity run should only be treated as the first chapter in a wave of events to come designed to undo the damage of the earthquake.

"Following such a devastating event, this kind of help should be regarded as granted," she commented.

Why Christo's Floating Piers had to be destroyed

Christo's latest temporary artwork, "The Floating Piers" at Lake Iseo in Italy, is now leaving traces in Germany - but they're intentionally unrecognizable. Some of them are literally buried in the sand. (05.08.2016)

Michelangelo, Botticelli, da Vinci - Florence is a Renaissance treasure trove. You could spend days in the Uffizi alone, but the city on the River Arno offers much more! (23.05.2016)