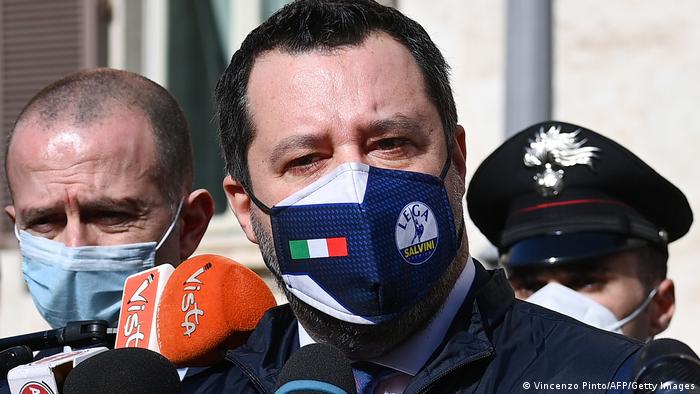 Salvini, the leader of the right-wing Lega Nord party, is known for his hardline views on immigration

Italian Prosecutor Andrea Bonomo said Saturday that former Deputy Prime Minister Matteo Salvini should not face trial on kidnapping charges after he blocked more than 100 migrants from entering the country two years ago. The case is currently being deliberated by a court in the Sicilian city of Catania, with a judge expected to make a decision on whether to open a trial against Salvini on May 14.

In July 2019, Salvini used his ministerial powers to prevent the Gregoretti coast guard ship carrying 116 migrants to reach Italian shores, forcing the ship to linger at sea for six days until other EU states would take responsibility for the asylum-seekers. Magistrates have characterized Salvini's actions as an illegal abuse of power.

What did the prosecutor say about Salvini's actions?

Bonomo said Salvini's conduct during the incident "does not amount to kidnapping," claiming the former minister "did not breach any international convention" in his handling of the asylum-seekers.

If the 48-year-old Salvini is convicted in a possible trial, he could potentially face up to 15 years in prison. A conviction could potentially bar Salvini, the leader of the right-wing Lega Nord party, from future political office.

How did Salvini react to Bonomo's remarks?

Salvini, an immigration hardliner, has defended his conduct during the 2019 incident and said he was happy with Bonomo's comments on the case.

"I'm happy because today the public prosecution said there was no crime, no kidnapping… so I calmly return to my children and that this will be over on May 14," Salvini said about the prosecutor's remarks.

Is Salvini facing any other court cases regarding his migrant policies?

Salvini is also facing a potential trial in Palermo over his decision to block a Spanish charity ship carrying over 100 migrants from reaching Italian shores in August 2019. A prosecutor in that case has called for the former minister to be indicted on kidnapping charges, but Salvini claims he was just defending Italy's borders.

Salvini was ousted from power in September 2019, after the populist Five Star Movement formed a new coalition government with the center-left Democratic Party. Lega Nord is now part of a unity government under technocratic Prime Minister Mario Draghi.