All of the children on board a hijacked school bus that was set on fire in northern Italy have escaped unscathed. Police said the man who took the vehicle claimed he wanted migrant deaths at sea to come to an end. 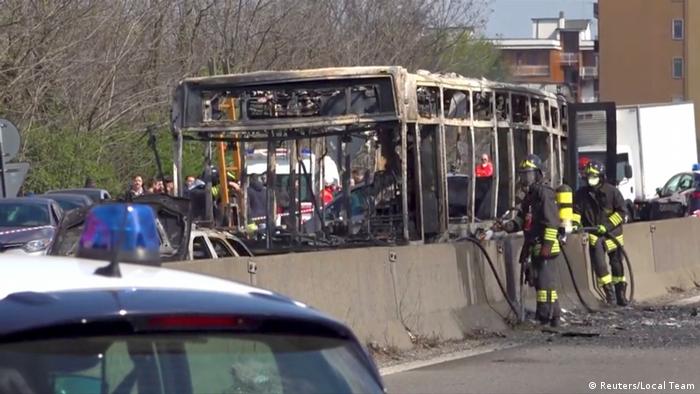 A school bus driver on Wednesday allegedly held 51 children and their chaperones hostage on a bus in the northern Italian city San Donato Milanese before setting it on fire.

All of the children were rescued when the bus crashed following a police chase, allowing officers to force open the back door and help students off the bus, as the driver threatened suicide.

The man, who police said was an Italian of Senegalese origin, allegedly ordered a teacher to tie the children's hands with plastic ties but the teacher only loosely attached the ties to four or five of them so that they could easily free themselves afterwards, local sources said according to Italian news agency ANSA.

Read more: UN refugee compact: What you need to know

ANSA reported that the ordeal lasted for almost 40 minutes as the man, apparently angry over government migrant policy, confiscated their phones and said no one would survive.

"We wanted to interrogate him immediately but he has burns on one arm," Milan chief prosecutor Francesco Greco told journalists, according to ANSA.

"We were all very scared," said one boy who was interviewed anonymously by La Repubblica newspaper. "He tied us all up and seized all mobile phones so that we could not call the police."

But one mobile fell on the floor and the boy used it to call the police after managing to untie his hands, according to La Repubblica.

Police spokesman Marco Palmieri said the after police arrested the man, "He shouted, 'Stop the deaths at sea, I'll carry out a massacre.'"

The Italian government has closed its ports to charity rescue ships that pick up migrants off the Libyan coast. Interior Minister Matteo Salvini has said this has helped reduce deaths because far fewer people are now putting to sea.

The United Nations estimates that some 2,297 migrants drowned or went missing in the Mediterranean in 2018 as they tried to reach Europe.

Terrorism not ruled out

Milan anti-terrorism prosecutor Alberto Nobili told German news agency DPA that the man's motives were unclear, but prosecutors were not ruling out terrorism. "Yes, we are considering all hypotheses," Nobili said.

"The important thing is that, thanks to the courage of the children ... an event that could have had a tragic outcome had a happy ending," Marchis said, according to ANSA.

Interior Minister Matteo Salvini said the man had a criminal record for drink driving and sexual assault, and suggested he was unfit to work as a school bus driver.