The European Championships finally got underway as Italy beat Turkey in Rome. The pan-continental tournament has its critics, but the sight of fans celebrating Italy's second-half performance gives reason for hope. 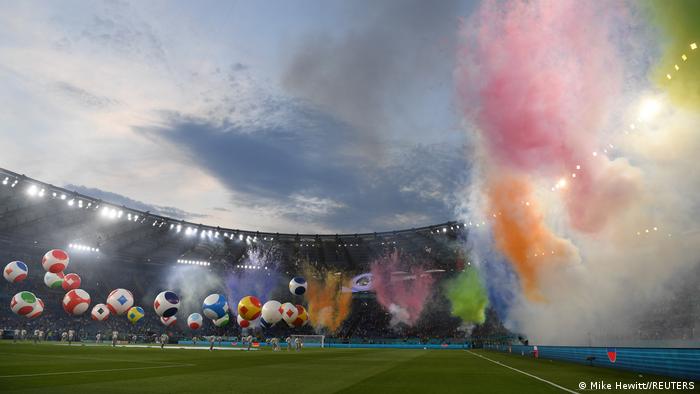 Fans, color and a sense of normality and hope returned to football

It took 364 days longer than expected, 53 minutes of patient play and an own goal from Turkey's Merih Demiral, but Italy finally opened the scoring at the European Championships on Friday night, en route to an ultimately comfortable 3-0 win.

Ciro Immobile doubled the lead in the stadium in which he plays his club football with Lazio, before Napoli's Lorenzo Insigne made it three, as Squadra Azzurra got off to a winning start in Group A.

Despite dominating up to 70% of possession in the first half, Roberto Mancini's men had failed to break down a well-organized Turkish defense which had only conceded three goals in qualifying.

But when Domenico Berardi found space in the Turkish box just seven minutes after the restart and fired the ball across goal, Turkey defender Demiral, who plays his club football in Italy with Juventus, could do nothing but divert it over his own goal-line.

Shortly after, the Turks were cursing their luck again when goalkeeper Urgucan Cakir saved well from Leonardo Spinazzola's shot, only for the rebound to fall to Immobile who made no mistake from close range.

But Cakir couldn't blame bad luck for his misplaced pass which led to Italy's third, Insigne firing into the bottom corner after being found by Immobile.

Yellow cards followed for Caglar Söyüncü and Halil Dervisoglu in the closing stages as Turkey's discipline, which had served them so well in the first half, evaporated. They had hoped to get at least a draw out of their opening fixture, but will now be under pressure to get points on the board against Switzerland and Wales.

As for Italy, victory extended their unbeaten run to 28 games as Mancini closes in on Vittorio Pozzo's record (30 games) between 1935 and 1938. The 56-year-old has thoroughly rejuvenated Italy after the country failed to even qualify for the 2018 World Cup, and Friday night's second-half performance will only increase the expectations at a tournament they are co-hosting. 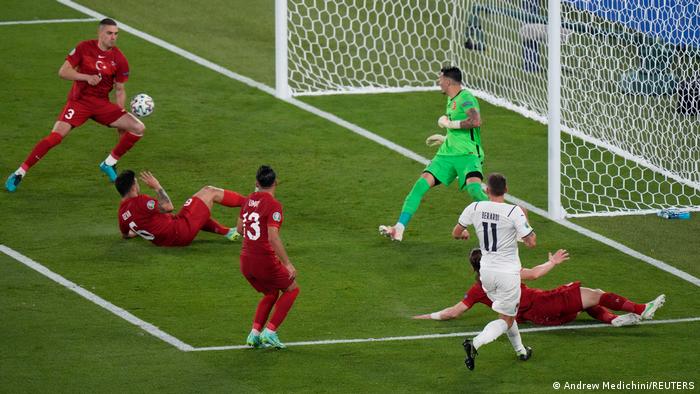 Indeed, one day short of a year after the originally planned start date, it was perhaps fitting that this pan-continental European Championship should kick-off in Rome, the capital of the European country which suffered first, and arguably most, at the hands of the coronavirus.

After a year of lockdowns, curfews, overrun hospitals and inconsolable loss, happy faces were once again visible on the sunny streets of the Italian capital. From the Colosseum to the Pantheon to the Piazza del Popolo, and across the Tiber to the Stadio Olimpico, Romans were greeted by an unfamiliar sight: football fans, decked out in blue of Italy or the red of Turkey and enjoying the warm summer weather.

18,000 of them had tickets for the opening game at the 72,000-capacity Olympic Stadium, but they made more than enough noise through their face masks to make up for those who couldn't be there.

Isolated matches have taken place in front of supporters across Europe, including the recent Champions League and Europa League finals, but this was the most tangible feeling so far that the continent and its most popular sport were taking a step back towards normality.

Critics will point out, with justification, that there is nothing normal about a football tournament taking place across 11 different countries, a concept which would be problematic enough from an environmental point of view at the best of times, but appears even less appropriate given the risks attached to international travel during a pandemic which isn't quite over yet.

Indeed, while all ticket holders in Rome on Friday night were required to provide proof of vaccination or of negative tests, there was little sign of social distancing as fans gathered outside the only two stadium access points. 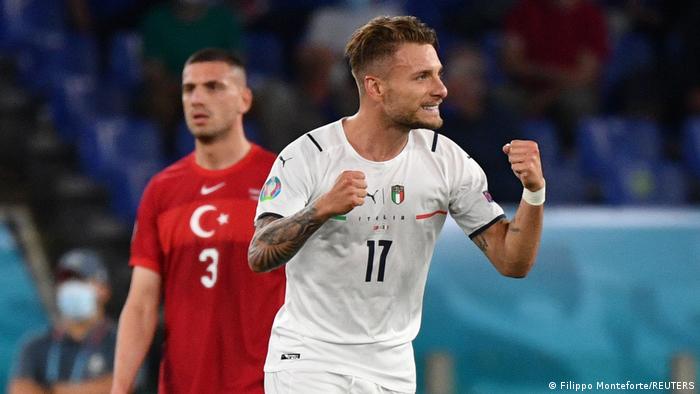 And then there's the politics. From the 1936 Olympics in Berlin to World Cups in Argentina in 1978 or Russia in 2018, there is always a political background to global sporting events. This time, however, it's not just one nation or one regime under the spotlight; there are several.

Russia, hosting seven matches in St. Petersburg, has already complained about Ukraine's kit, which features an outline of Ukraine including the Crimean Peninsula, annexed by Russia in 2014, while the Turkish Football Association hasn't hidden its excitement at the prospect of two "home games" in Baku, Azerbaijan, who it explicitly supported during the recent war in Nagorno-Karabakh.

The Puskas Arena in Budapest is the only venue operating at 100% capacity, with nationalist Hungarian Prime Minister Viktor Orban keen to showcase how his country has defeated coronavirus. Meanwhile, in London, some England supporters are expected to boo their players for taking the knee against racism and discrimination, as the country's post-Brexit culture war continues.

All those issues and more will come to the fore, or will at least loom in the background, as this unprecedented tournament unfolds over the next month.

But on Friday night, it was the competing chants of "Türkiye!" and "Italia!" and the sight of Ciro Immobile celebrating with jubilant fans in the stadium he calls home which provided the most powerful message: one of joy and one of hope after a year which has featured so little.