Italy battles to house migrants at border with France

Italian officials have been forced to take emergency measures to accommodate a flood of migrants who were staging a sit-in at a border crossing with France. Rome says it has increased border monitoring as a result. 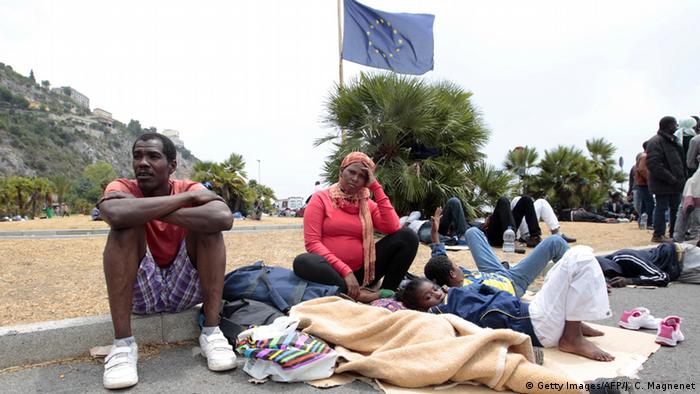 More than 200 migrants, who had been rescued at sea, had been sleeping in train stations after France tightened their border controls, preventing many of the immigrants from continuing their journeys to northern Europe.

Italian officials closed a migrant reception area close to the main entrance of the Milan train station where hundreds of immigrants, many from Somalia, Eritrea, Ivory Coast and Sudan, have been sleeping this week.

Authorities cited increased heath and sanitation concerns as the reason for closing the main entrance hall.

The migrants, mostly arriving from southern Italy after being rescued at sea, have taken refuge in and around Milan's central station due to insufficient bedding at emergency housing centers.

French police have blocked the border with Italy since Thursday, with the country's Interior Ministry saying it had reinforced border checkpoints over the past few weeks after an increase in migrant arrivals.

Meanwhile, the Austrian Interior Ministry said its border surveillance measures had been increased after its neighbors, Germany, began border controls during the recent G7 summit and the international Bilderberg conference, which is to take place in Austria this weekend.

Speaking to the Associated Press, Gemma Azuni, a Rome city official, said the border closures were causing many headaches.

"All stations are crowded with people who are not receiving sufficient help," she said.

The French news agency AFP reported Saturday that Italian police had been deployed to the border with France after French police refused to let the migrants enter.

Wearing riot gear, the police pushed migrants back to the township of Ventimiglia, five kilometers (three miles) from the border crossing.

Around 50 members of the group subsequently escaped the police cordon, taking refuge on rocks near the border post.

"Where are our human rights?" several of the men reportedly shouted, claiming the police had mishandled them.

The migrants eventually complied with police orders, before officials said migrants would be taken by bus to immigrant reception centers in the western province of Imperia.

Migrants landing in Italy are usually able to travel through neighboring France, Austria, Switzerland and Slovenia due to the Schengen open border accord.

On Sunday, June 14, Europe celebrates the 30th anniversary of the Schengen Agreement which abolished internal border controls between the 26 member states.

The European Commission has proposed an anti-terror cell after increased threats following attacks in Paris, Copenhagen and Brussels. The cell will be a part of Europol with headquarters in The Hague. (28.04.2015)

Bavarian police have uncovered 10,000 illegal border crossings in just a few days. The revelation has caused some to question the border-free Schengen area - and not only in Germany. (13.06.2015)