Italy's police have forcibly removed dozens of African migrants from makeshift camps on the country's Mediterranean border with France. The move comes as EU ministers meet in Luxembourg to discuss immigration crisis. 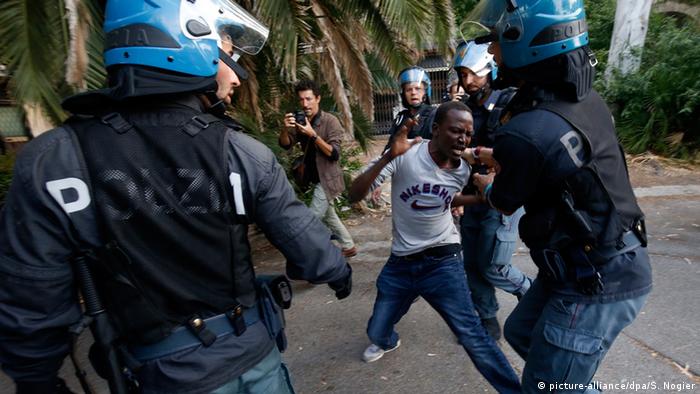 Around 300 migrants had been camping out for days in Ventimiglia, hoping to travel farther north in Europe, when the Italian border police in riot gear hauled them on Tuesday. Some of the migrants - mostly from Sudan, Somalia and Eritrea - resisted being loaded onto buses, whereas the rest cooperated with the police. Some fled in the direction of the rocks near the sea.

A police officer was reportedly injured during scuffles and was treated at the scene.

"We are helpless and hopeless and at the mercy of the police," Mustafari, a migrant from Sudan, told the Reuters news agency, adding that he had tried to reach Sweden via train six times, only to be forced back to Italy by French police each time.

Most of these migrants were sent back to Italy by the French authorities last Friday. They camped in the border town of Ventimiglia, protesting they should be allowed to travel to their desired destinations.

The African migrants have become a source of tension between France and Italy. Italy's Interior Minister Angelino Alfano, who arrived in Luxemburg for the EU talks on the migrants' crisis, described their plight as a "punch in the face of Europe."

France says that the migrants are Italy's responsibility according to the EU law.

As the main landing point for Europe-bound boat migrants, Italy alone has registered around 60,000 migrant landings since the start of this year.

Italian Prime Minister Matteo Renzi said on Monday there could be "no national selfishness and no closing of the eyes."

"If Europe wants to be Europe, it must tackle this problem collectively."

Renzi also threatened on Sunday to implement a "Plan B" to deal with the migrant crisis that would "hurt" Europe. Although not specifically stating his options, Italian media reported that Rome could start issuing newly arrived migrants with temporary visas, giving them the right to travel throughout the Schengen zone.

German Interior Minister Thomas de Maiziere has warned that failure to tackle refugees could make EU countries reintroduce border checks. This could have adverse effects on free travel within the Schengen region. (16.06.2015)