Two Italian aid workers kidnapped last year in northern Syria have arrived back in Rome, a day after their release. Rome has opened an investigation into their abduction. 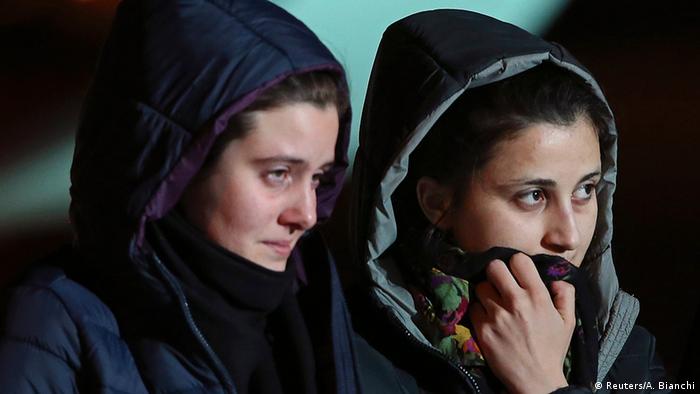 Italy's foreign minister, Paolo Gentiloni, met 20-year-old Greta Ramelli and 21-year-old Vanessa Marzullo in the early hours of Friday morning as they arrived at Ciampino military airport on a flight from Turkey.

Heads bowed, the women were taken to an airport hall without speaking to waiting media. They were then taken to the hospital for observation before meeting with Rome's anti-terrorist prosecution office, which has opened an investigation into their abduction.

"I'm feeling enormous joy: this is the news I have been waiting for for a long time," Salvatore Marzullo, father of Vanessa, said after hearing news of their release.

Interior Minister Angelino Alfano tweeted it is "with great joy and huge sigh of relief."

The Italian foreign ministry said their release was a culmination of "intense work by team Italy." Officials have not released details of how the women came to be freed.

Marzullo and Ramelli, from the Lombardy region of Italy, were abducted on July 31 near the northern Syrian city of Aleppo, three days after they had arrived from Turkey. The women were taken hostage while seeking to provide healthcare in the embattled city.

The two women appeared in a video released December 31, asking the Italian government to help get them home, with Ramelli saying they could be killed.

"We are in big danger and we could be killed. The government and its militaries are responsible [for] our lives," one of the women said in English, appearing to read from a statement.

The video said the women were being held by the Nusra Front, an off-shoot of al Qaeda's Syria wing.

Nusra Front, and militant "Islamic State" (IS) have held Westerners hostage in Syria, which has been seen a long-running civil war.

Several male hostages, including aid workers and journalists, were beheaded by IS in 2014.