The 16 defendants stand accused of "attempting to overthrow the government" and organizing protests in 2013. If convicted, they could receive life sentences without the chance for parole. 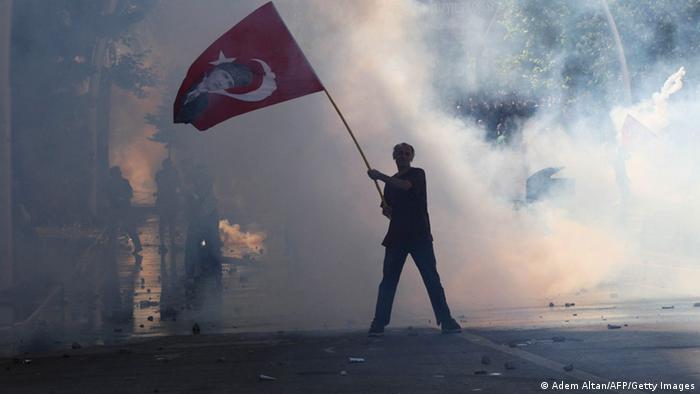 A landmark trial against 16 people accused of "organizing and financing" peaceful protests in 2013 and attempting to "overthrow the government" began in Istanbul on Monday.

Two of the accused — respected businessman and rights activist Osman Kavala, and prominent NGO worker Yigit Aksakoglu —  are been held in Istanbul's high-security Silivri prison, where the courthouse housing the trial is located.

Kavala rejected the "irrational claims which lack evidence" in his opening statement to the court.

"I was involved in projects contributing to peace and reconciliation. There is not a single piece of evidence or proof in the indictment that I prepared the ground for a military coup," Kavala told the court.

The 14 other defendants are at liberty. Some fled the country, such as lawyer Can Atalay, and Can Dundar — the former editor-in-chief of Cumhuriyet newspaper, who has lived in exile in Germany since 2016.

"At Gezi, people took to the streets to demand equality, freedom and justice," Atalay told Germany's dpa news agency. With the trial, the government is now trying to "rewrite history" and present the Gezi movement as a conspiracy and an attempted coup, he added.

Fighting against the government

The protests began in 2013 as a peaceful environmentalist sit-in in Gezi Park — a small, green space in central Istanbul beside the city's famous Taksim Square — by people concerned about government plans to cut down trees to make space for a new shopping mall.

The peaceful demonstration then grew considerably into a nationwide anti-government movement following a brutal police crackdown.

Amnesty International slammed the charges against the accused as "absurd" and "an egregious attempt to silence some of Turkey's most prominent civil society figures."

The trial is expected to conclude on Tuesday, only its second day.

The 13 people arrested were reportedly accused of trying to create "chaos and mayhem" and overthrow the government. More than 50,000 people have been arrested in Turkey since a failed coup attempt in 2016. (16.11.2018)