Israel′s second summer of discontent | World | Breaking news and perspectives from around the globe | DW | 15.07.2012

One year after waves of protests in Tel Aviv, thousands are taking to the streets again, demanding political reforms. The mood darkened over the weekend following the self-incineration of an activist. 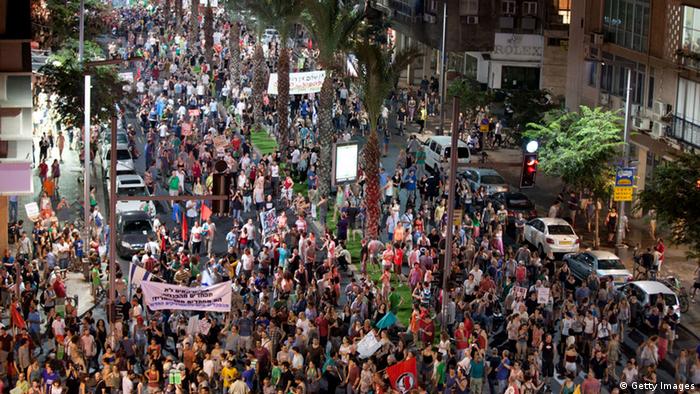 The slogan of last year's protests is back as young Israelis take to the streets of Tel Aviv to chant, "The people demand social justice!" Demonstrators are renewing the criticism of high living costs and low wages that they levelled in 2011. The cities of Jerusalem, Haifa and Beersheba have seen similar protests. 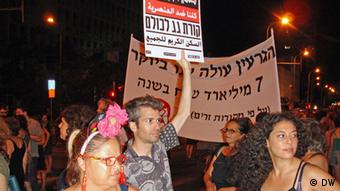 Once more, Israelis are protesting on broad social issues

Saturday's protest brought a smaller number of participants than expected, but those who were on hand displayed confidence. "This, by itself, is quite a big change already," demonstrator Aya Schwedt said. "Many people have gotten a lot more active after long years of saying nothing - just staying at home and being collectively depressed."

The demand for social justice in Israel has many faces - and many issues. But there are signs that the general mood is shifting. Some have grown more somber, and others have turned to drastic measures.

Following protests on Saturday, a middle-aged man dowsed himself with a flammable liquid and then set himself on fire. He was admitted to a hospital with severe burns. Before setting himself ablaze, he had read out a letter outlining the financial difficulties he faces. The case has shocked the nation and underscored some protesters' concerns.

"I believe, to really be successful, we also need to address the big topics that shape our society," one young demonstrator said, adding, "It starts with a dialogue on the Israeli occupation, on the priorities of this country, which only spends money on the military and only talks about security, the military, rockets and Iran." 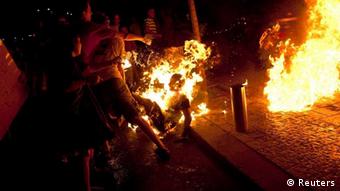 Drastic measures: a protestor set himself on fire

One of the faces of the movement, journalist Stav Shaffir, also says she has grown more thoughtful this summer. A petite woman with fiery red hair, she was among the small group of people who, last year, were the first to put up tents at Rothschild Boulevard - marking the beginning of a summer of protests.

"Much has happened since then," the 27 year-old said. "We've lost our naivety. We thought that the government would take some responsibility. We thought they would admit that mistakes have been made and now would be the time to go in a new direction. But that hasn't happened."

In 2011, tens of thousands of people took to the streets throughout the country. The initial protests against high rents and the cost of living turned into a broader movement with more general demands. Both within Israel and from abroad, sympathizers followed what happened around colorful tents set up on Rothschild Boulevard. A survey conducted by the daily Haaretz, however, showed that only 26 percent of all Israelis felt their living conditions had improved after the protests - a sobering result for some, and reason for others to renew their demonstrations. 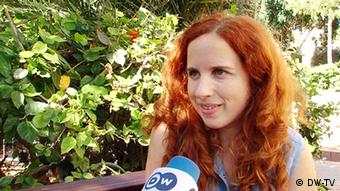 A face of the movement: journalist Stav Shaffir

"Last summer was magical," Stav Shaffir said. "But we shouldn't attempt to repeat that." Instead, Shaffir believes now would be the time for trying out other strategies to influence politics. "We are spreading out to different corners of this country, creating groups that address social issues, such as health care, taxes or the environment. Our political system needs fresh blood!"

Shaffir added that the politics as usual has lost credibility for many young people. She noted that she did not know whom to vote for during the last election: "I want to vote for someone I can trust."

A second group of protesters have begun voicing their discontent. At the Arlozoroff station in Tel Aviv, activists put up camouflage tents; their call is for fairness in the military draft. On Saturday, June 14, 20,000 Israelis came together for a demonstration in Tel Aviv, demanding no more exceptions from compulsory military service for the Haredim, communities of ultra-Orthodox Jews. 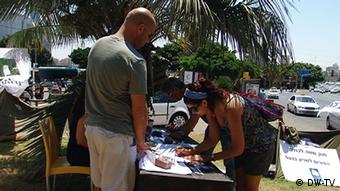 Protests now include the demand for a universal military draft law

Boaz Nol is one of the protesters angry at people he calls "slackers," who try to escape from the draft. He is now 34 and has finished his service, but he still must go back for one or two weeks each year to take part in exercises.

"We do have a draft in Israel. Every citizen - male or female - has to join the army at the age of 18. We all have to serve our country, and we don't get asked if we want to or not," Nol said. "Unfortunately, due to politics, we have this strictly religious faction within our society that is exempt from that. And we are here to say that this isn't fair."

Adi Cohen is another protester enduring the smothering heat to get the signatures of passer-bys. Three of her four children have already completed their service, and the fourth is currently serving.

"The ultra-Orthodox must also serve. Their children, too, have to be drafted once they turn 18. Only after that should they be allowed to go to work or study." It's only fair that if her son has to sacrifice three years for his country, all Israelis should be obligated to do the same, Cohen said. Universal draft supporters cite frustrations with the government's political zigzagging. Legislators need to approve a new military draft law by August, but they have so far failed to agree on the fundamentals.

Activists aim to keep up the pressure: the next big demonstration is scheduled for as early as the upcoming week.

Israeli police say they have arrested 85 people after violent demonstrations in Tel Aviv. The protests are the latest sign of a nationwide movement calling for social reform. (24.06.2012)

Israel is up in arms - and for once it has almost nothing to do with the Palestinians. Prime Minister Netanyahu has vowed to address Israelis' complaints after months of protests against high living costs. (08.08.2011)